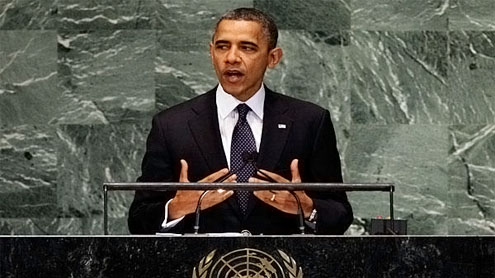 While the former plugged his country’s case and in the process expressed Pakistanis’ deep hurt and anger at the blasphemous film, the latter mounted a spirited defence of freedom of expression, no matter how provocative. That Obama view was challenged on Wednesday by many Muslim leaders demanding once again international action to stop religious insults. Obama’s thrust focused a great deal on attacks against Americans in reaction to the film and despite his administration’s distancing itself from it. Muslim heads of state on the other hand argued forcefully for a clampdown on Islamophobia.

Indonesia, the largest Muslim country by population, was represented by its President Susilo Bambang Yudhoyono, who characterised the film as another “ugly face” of religious defamation. Quoting the Universal Declaration of Human Rights, Yudhoyono said, “Everyone must observe morality and public order,” concluding that, “Freedom of expression is therefore not absolute.” He called for an international instrument to effectively prevent incitement to hostility or violence based on religious beliefs. King Abdullah of Jordan, a close ally of the US, added his voice to the criticism of the film and the violence it sparked. Afghan President Hamid Karzai condemned the depravity of the fanatics who made the film that set off the storm.

As these influential voices from the Muslim world indicate, the fault line between the US/western defence of free speech, a principle regarding even blasphemous material being tolerated as Obama argued at the UNGA, arrived at through the secularisation of the state in the developed world’s history, and the deeply held respect for the Prophet (PBUH) and faith throughout the Muslim world, threatens to grow bigger.

President Obama’s avowed intent early in his tenure to reach out to and embrace the Muslim world has remained a fond hope, partly because of the legacy he inherited of US-led wars in Afghanistan and Iraq, partly his administration’s role in the toppling and brutal killing of Muammar Gaddafi in Libya and suspicions of covert intervention in Syria against the Bashar al-Assad regime. The provocative film episode proved to be the icing that takes the cake.

Anti-American sentiment in the Muslim world has flared because of each and every one of these causes enumerated above, as well as historical memories of humiliation at the hands of western colonialism and imperialism. This hostility towards, and the ‘isolation’ of Washington from a significant segment of the world threaten the US ability to continue to claim the mantle of world leader. The US is the mightiest military power on earth many times over, but it has lately been exposed a s a colossus with feet of clay, given the dire straits its and the developed world’s economies are passing through.

In the west’s uncritical and bland defence of freedom of speech and expression without any sense of responsibility for the consequences, the US and its western allies are shooting themselves in the foot. They have forgotten that someone else’s freedom ends where my nose begins. The fact that the west has travelled far from religious adherence to even lampooning religions and religious figures does not translate practically into license to hurt and insult those with a different set of beliefs and values.

It was not therefore an exaggeration when President Zardari told the UNGA that such provocations, if not stopped, threaten the peace of the world. He could also have added that they bring grist to the mill of the extremists in Muslim societies and elsewhere, who are then enabled to hold moderate, liberal, enlightened opinion hostage. If the west cannot or will not see beyond its nose on the issue of consideration for others’ deeply held beliefs and sentiments, and refuses to act in consonance with the world to nip this increasing mischief in the bud, it will have no one but itself to blame for the impact on its interests in the Muslim world and arguably even beyond. – Dailytimes