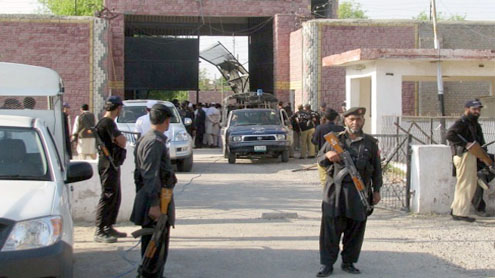 PESHAWAR: The Khyber Pakhtunkhwa government has ordered suspension of 27 officials including senior officers, prison staff, paramilitary soldiers and policemen on charges of negligence during the Bannu jailbreak incident.

Addressing a press conference here on Wednesday, Minister for Information Mian Iftikhar Hussain said that the decision was taken in the light of findings of an inquiry, initiated soon after the incident on April 15.“The committee held civil administration, prison department, law enforcement agencies and intelligence agencies responsible for the biggest prison attack in the country’s history,” he said.The provincial cabinet in a special meeting, chaired by Chief Minister Ameer Haider Khan Hoti, ordered suspension of the officers and recommended departmental inquiries against them.

“Today, all these officials have been made officers on special duty (OSDs) and from tomorrow the departments concerned would issue their suspension orders,” the minister said, adding that the employees of federal government would be dealt with by their respective departments.Mr Hussain mentioned names of 27 officials, who were suspended and said that policemen and paramilitary deployed at three main police stations and checkposts in the area had also been made OSDs.He said that departmental inquiries would be conducted against those officers and final report would be presented to the chief minister within 20 days.

More than 100 militants reportedly came in 40 to 50 vehicles from the adjacent North Waziristan Agency and attacked the prison and set free 384 inmates.High profile inmates including Adnan Rashid, who was convicted on charges of life attempt on former President Gen (retired) Pervez Musharraf, had also escaped during the jailbreak.Disbanded Tehrik-i-Taliban Pakistan claimed responsibility for the jailbreak and said that the attack was planed to set free Adnan Rashid.The minister said the army would also conduct its own inquiry and would take action against its officers.He said that the matter had been discussed in the meeting of apex committee comprising governor, chief minister and corps commander, Peshawar.

He said that the army could not be exonerated from its onus of responsibility in the incident.Mr Hussain said that intelligence agencies had intimated the authorities concerned four months ago that militants could attack prisons in the province and Bannu jail was specifically mentioned in the report. But no agency or department heeded to thewarning, he said.Ironically section officer of the home and tribal affairs department Ghulam Mohammad had ordered shifting of Adnan Rashid from Haripur Central Jail to Bannu jail without informing the competent authorities.

“This is amazing that how a section officer issues no objection certificate for shifting a high profile convicted prisoner from one prison to another,” said Mr Hussain.He said that shifting of Adnan Rashid from Punjab to Khyber Pakhtunkhwa was illegal and Punjab government should also conduct inquiry in the matter.“We believe that he was shifted to Khyber Pakhtunkhwa under a well-conceived conspiracy,” he observed, “There is no justification to transfer convicted prisoner to another detention centre.”He said that provincial government had decided that prisoners shifted from other provinces would be sent back to their places of origin. Besides Adnan Rashid, he said, two most wanted terrorists had also escaped from the jail. However, he declined to
disclose their names.

NEC meets tomorrow to approve Rs.825 b next development budget