The summer of discontent: No respite from power cuts 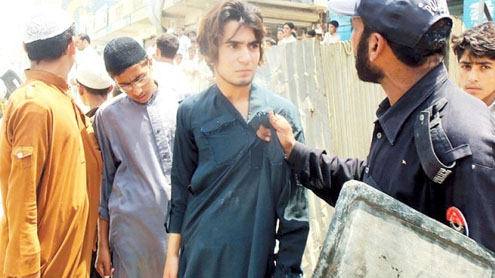 No respite from power cuts

PESHAWAR / SWAT: Despite the Prime Minister’s announcement of curtailing power cuts during Ramazan, the problem persists especially during Sehr and Iftar hours.

This fuelled public outrage and a number of protests were held on Tuesday in Swat, Peshawar, Haripur, Dir, Charsadda, Nowshera, Kohat and Malakand. The protesters criticised the government and Water and Power Development Authority (Wapda) for failing to put an end to unscheduled power cuts.In Haripur, residents forcibly entered the Haripur grid station and laid siege for a few hours.

They warned Wapda authorities of dire consequences if the issue was not addressed within two days.The residents of Panian, Gadwalian, Baka, Kalu Pind and Bhera villages chanted slogans against MNA Sardar Mushtaq, complaining that he enjoyed uninterrupted supply of electricity, whereas his electorates were made to suffer in the scorching heat.

In Balakot, the protesters staged a sit-in outside the Balakot grid station. Led by District Khateeb Maulana Inamullah Balakoti and Haji Fazalur Rehman of Jamaat-i-Islami, they marched on different roads, chanting slogans against Wapda authorities and the government. Protests were also held in Mansehra and parts of Abbottabad.Though there were no mass protests in Peshawar and surrounding areas, people were perturbed and blasted over government for their failure to control the power crises during Ramazan. Unlike Peshawar, people in other cities took to the streets and ransacked Wapda instalments and blocked main roads for hours to express their anger.

In District Kohat, the Kohat District Bar Association President Advocate Imtiaz Shahid, along with General Secretary Advocate Samiullah, led a protest rally against power outages and took control of the grid station located at Pindi Road. After the takeover, Wapda official present at the grid station restored electricity to the whole district and assured to solve the low voltage issue within five days. People were bearing 18 hours to 20 hours of loadshedding in Kohat and low power voltage problems.

The station’s executive engineer said that they are facing serious security problems to fix the damaged Shaikh Muhammadi Tower transmission line from where the electricity is being supplied to Kohat. He added that electricity will be temporarily provided to Kohat from Punjab and assured there will be no power outages during Seher and Iftar times.

In Charsadda district, hundreds of people staged protest demonstration against Wapda officials of Sardehri subdivision for causing up to 19 hours of loadshedding. The demonstrators were led by local party activists of Pakistan Peoples Party-Sherpao, who blocked the main Charsadda-Marda Road for three hours. A large number of police personnel were called in, however, the protestors dispersed peacefully after recording their protest.

In Maidan, a locality of Upper Dir district, people are facing severe water shortage in the area as due to power outages their water pumps remained out of order. The Jamat Islami (JI) local activists threaten to rally against the government and Wapda officials if they failed to provide electricity within two days.

Extended outages have also caused water scarcity in Swat, where people are being forced to travel long distances to fetch water. While grappling with the issue, two groups scuffled at the Dangaram locality here on Monday evening and 10 persons were injured as a result. “After a long day of fasting, we have to fetch water from far-off areas. Water sources are few and far and people often get impatient,” said an exhausted local, Sar Zamin, said. – Tribune