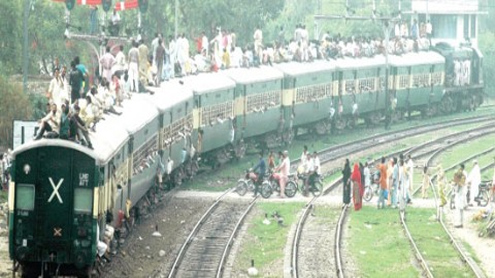 LAHORE – Eid means happiness and Pakistanis have got thrice the happiness this year again. For a second time in recent history, Pakistanis are going to celebrate three Eids this year – one already been celebrated in parts of the Tribal Area on Saturday, one being celebrated today (Sunday) in Khyber Pakhtunkhwa, while one to be celebrated tomorrow (Monday), per the official announcement of the Central Ruet-e-Hilal Committee.

Earlier in the evening on Saturday, the Charsadda Police on directives of the district government had arrested a cleric who announced Eidul Fitr in certain areas of Charsadda on Saturday. Certain areas of Charsadda celebrated Eidul Fitr on Saturday, a day before Saudi Arabia, following a late night sighting of the Shawwal moon by Barelvi sect clerics. The arrested cleric has been identified as Lal Rehman. Tribesmen in a specific pocket of North Waziristan also observed Eidul Fitr on Saturday in accordance with the fatwa (edict) of Maulana Gul Baas Khan belonging to the village of Khedarkhel of Mirali sub division.

But a majority of the dwellers, especially occupants of government installations from Miranshah headquarter of North Waziristan, did not follow the edict of Maulana Gul Baas Khan which was also endorsed by another religious figure, Maulana Gul Naseeb associated with Jamiat Ulema-e-Islam-Fazl. Addressing a press conference after the Central Ruet-e-Hilal Committee’s meeting, Mufti Muneeb said no credible testimonies of sighting of the moon were received from provincial capitals, including Islamabad, Lahore, Karachi and Quetta, therefore Eid would fall tomorrow (Monday).

The people of Hazara will celebrate Eid on Monday along with a majority of the country, according to Baba Haider Zaman, chief of the Tehreek-e-Hazara.
Pakistan Meteorological Department had said there was no chance of moon sighting in the country on Saturday.  The chief meteorological officer said that although it was the committee’s discretion to announce sighting of the moon but according to Met office it was highly unlikely that the moon could be seen on Saturday. The Met office said the moon’s age should be 30 hours for sighting but it would only be 22-hours-old on Saturday and would not be seen in Pakistan.