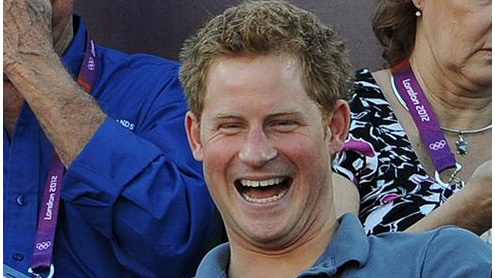 Media has posted photos of what appears to be the bachelor royal, stark naked, during a game of strip billiards in a hotel suite.  In the photos, which are quickly circulating, the ginger prince — or someone who looks just like him — is shown standing, covering his private parts with his hand. A woman, who also appears to be completely naked, is right behind him. A second image shows Harry wrapping his arms around a naked woman, revealing his bare royal behind. that a royal source confirms it’s Harry in the photos. media quotes a palace spokesperson as saying they are “genuine.”

According to Media, a rep for the royal family said, “We have no comment to make on the photos at this time.” Harry, 27, sure has been having fun the last couple of days. He was spotted on Saturday at the MGM Grand’s Wet Republic pool scene, and later at the XS nightclub at Wynn Las Vegas’ Encore resort. He was keeping things low-key at first. Then on Sunday, he returned to XS where he got into a swimming race with Olympic gold medalist Ryan Lochte. The two hunks were surrounded by bikini-clad babes.Harry must know by now that when you’re a star, what happens in Vegas definitely doesn’t stay in Vegas.-usatoday