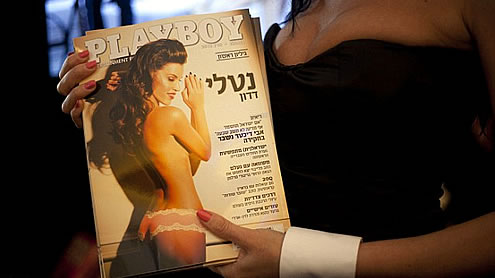 A U.S. emigre, Daniel Pomerantz, on Tuesday launched the first Hebrew language edition of the popular men’s magazine. Playboy has been widely available in Israel for years, but this marks the first local edition of the magazine. It features Israeli models and articles by Israeli writers.

It’s not clear how well the magazine will be received in the Holy Land, where religious sensitivities simmer under the surface and observant Jews and Muslims live by strict modesty rules. Adult magazines and videos are freely available, but not with local models and not in Hebrew.

Playboy was launched in 1953 with the iconic Marilyn Monroe centerfold. It peaked in popularity in the 1970’s. Circulation has declined since the rise of adult Internet sites. Small-time Bollywood actress Sherlyn Chopra, 28, says she is proud to have pushed the envelope in a country where public nudity in any form remains largely a taboo.
Playboy, along with a host of other foreign adult magazines, is banned in the country.

‘I had no apprehensions and have no regrets; just feelings of pure liberation and sheer excitement,’ she said of the Playboy shoot in Los Angeles. – Dailymail

Slowdown boon: Buy a car and get Another Free

Slowdown boon: Buy a car and get Another Free