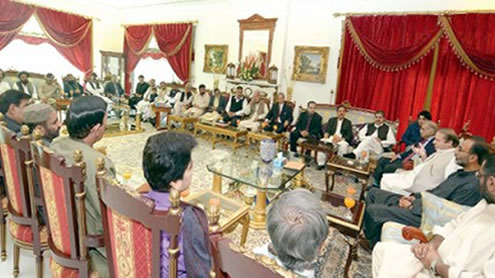 LAHORE – In a coup against the ruling Pakistan People’s Party (PPP) in Balochistan in the run-up to general elections, former president of the PPP Balochistan chapter, Nawab Lashkari Raisani, along with 21 other party leaders, announced their decision to join the Pakistan Muslim League-Nawaz (PML-N) on Tuesday.

A 22-member delegation from Balochistan met with PML-N chief Nawaz Sharif in Raiwind and announced their decision to join the party. The meeting was also attended by Punjab Chief Minister Shahbaz Sharif.
The 22-member delegation included Lashkari Raisani, Humayun Kurd, Ismail Gujjar, Tahir Mehmood, and Ayub Khoso among others.

Lashkari Raisani is the younger brother of former Balochistan chief minister Nawab Aslam Raisani, and was appointed as president of the PPP Balochistan chapter by former PPP chairperson Benazir Bhutto in 2003. However, in April 2012, he resigned from his Senate seat and ended his nine-year-long association with the PPP over, what he called, the failure of the federal and provincial governments to improve security situation in the restive province.

Speaking at a joint press conference with the PML-N chief on Tuesday, Raisani said the PPP had deviated from the ideology under which Benazir Bhutto led the party. He said the situation in Balochistan had worsened over the years. “The entire country, including Balochistan, is facing a tough crisis,” said Raisani. “I have decided to join the PML-N to guide the country out of this crisis.” Raisani also expressed his full confidence in the leadership of Nawaz Sharif. – Pakistantoday