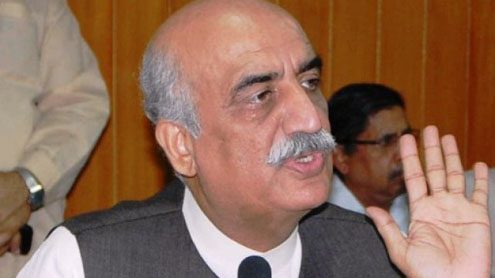 Chaudhry Qamar Zaman as chairman of the National Accountability Bureau (NAB) following months-long deliberations on the issue.However, the consensus between Prime Minister Nawaz Sharif and Opposition Leader in the National Assembly Syed Khursheed Shah received the first blow the same day when Imran Khan-led Pakistan Tehreek-e-Insaf (PTI) rejected the appointment by describing it a “settlement” between PML-N and PPP without consulting it about the new name.The consensus on Chaudhry Qamar Zaman, presently serving as interior secretary, came as a surprise as his name was not included in the list of persons who were being discussed for the office of NAB chairman.Khursheed Shah informed the media in his hometown that he and the prime minister have agreed to appoint Qamar Zaman as head of the anti-graft body.He said the prime minister phoned him on Tuesday and “finally we both arrived on a consensus to give this important position to Chaudhry Qamar Zaman”.The opposition leader also claimed to have contacted the PTI and Muttahida Qaumi Movement (MQM) on the issue and said the PTI did not come with anyresponse on this name.

The PTI, on the other hand, rejected the new NAB chief name and called the appointment “illegal”, saying that the party was not consulted on the issue.“This is a sort of settlement between PML-N and PPP and PTI has no saying in it. Khursheed Shah acted as leader of PPP rather taking all opposition partiesalong with him,” Shireen Mazari, the PTI information secretary, said on Tuesday.Earlier, in the five rounds of consultation between the prime minister and opposition leader since the new government sworn in, both sides failed to reach a consensus.

The consultation process started with the names of Justice (r) Rehmat Hussain Jafferi and Khawaja Zaheer Ahmed from the government side and Justice (r) Sardar Raza Khan and Justice (r) Bhagwandas from the opposition PPP side. With the passage of time more names were included by dropping the earlier ones. During a meeting last week, the prime minister and opposition leader

discussed the names of Justice (r) Ajmal Mian, Justice (r) Ijaz Chaudhry and former bureaucrats Chaudhry Rauf and Shaukat Durrani. The position had fallen vacant on May 28 after the Supreme Court declared illegal the appointment of former National Accountability Bureau chairman Admiral (r) Fasih Bukhari on a petition filed by Chaudhry Nisar Ali Khan against “meaningless” consultation. Last month, thecourt asked the government to make the appointment soon or be ready to face the consequences. -App