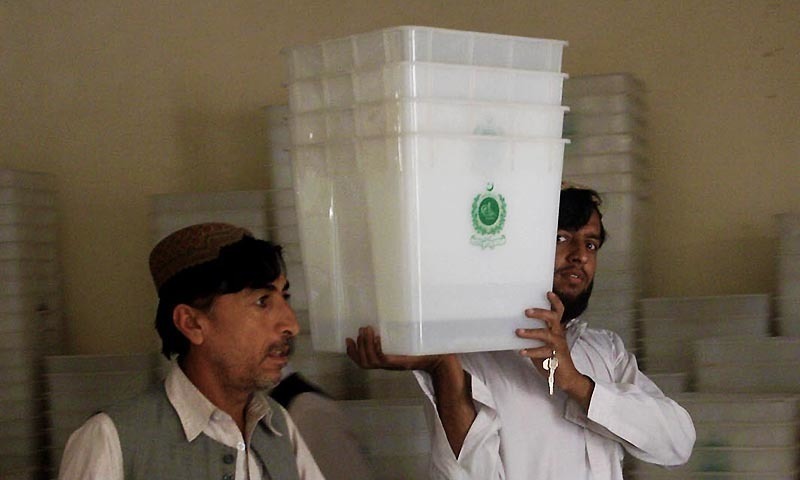 The Election Commission of Pakistan (ECP) again cut a sorry figure before the Supreme Court on Thursday when it expressed helplessness and said the process of delimitation of wards for holding the local government elections would be initiated when the commission received complete data from Punjab and Sindh. “The ECP is committed to initiating the process of delimitation of local governments as early as possible after the receipt of complete information relating to notification of demarcation of local areas, determination of number of union councils/wards and authenticated maps from the Punjab and Sindh governments as well as amendments in the respective acts by the two provinces,” the commission said a report. And not amused with the pace of progress with regard to the measures for holding the local government elections, the Supreme Court reiterated earlier directions to the two provincial governments to complete in a month all legal process for holding the local government polls. The court also ordered the federal government to promulgate ordinance for empowering ECP to hold similar elections in all the 43 cantonment boards of the country. The next hearing date is Feb 12. A three-judge bench headed by Chief Justice Nasir-ul-Mulk had taken up the implementation of its March 20 judgment under which the court had vested ECP with the authority of carrying out delimitation of the constituencies and then holding the local government elections in Sindh and Punjab.

The verdict had also declared the absence of the local government bodies for over nine years as against the constitution and law. Senior counsel Akram Sheikh, representing ECP pleaded before the court to bind Sindh and Punjab to complete election process so that the commission could announce the polls schedule within a week. In its report the commission said that it held a meeting of representatives of the provincial governments and the cantonment boards on Dec 30 last year during which the Punjab local government secretary assured that the exercise of demarcation of local governments and determination of the number of seats in local government institutions have been completed for 31 districts of the province. Whereas the requisite notification of demarcation of the local governments and the determination of number of seats along with the authenticated maps would be provided to the commission soon after completion of the requisite exercise in remaining five districts. The draft for removing anomalies in the Punjab Local Government Act, 2013, as highlighted by the commission during a similar meeting have been prepared and the same would be submitted before the provincial assembly for consideration of an amendment in the act.

The local government and community development department had also informed, the report said, that the details of local areas, number of union councils and wards in each local government along with their maps pertaining to 24 districts have been sent to the provincial election commissioner (PEC) Punjab. Whereas the information regarding rest of the 11 districts would follow soon, it said. The PEC has also informed that total number of population of each local area had not been provided by Punjab, the report said. Thus the exercise of delimitation could not be initiated. Referring to Sindh, the report explained that the existing provisions of the Sindh Local Government Act, 2013, require reconsideration for the sake of clarity. Moreover the printing of ballot papers for the multi-member constituency in the party-based elections might be a highly challenging task for the Printing Corporation of Pakistan, the report said, adding that the PEC Sindh had proposed that single member constituency be delimited for the purpose of conducting elections against the seats of general members in the union council and union committee. Likewise, the Sindh local government secretary has stated that the process of notification of demarcation of local governments and the number of seats, preparation of authenticated maps was in progress and the requisite date and maps would be provided to in a few days.

Similarly, the draft bill for removing anomalies in the Sindh Local Government Act, 2013, as pointed out by the commission has been submitted before the competent authority which would be tabled in the provincial assembly for consideration. Referring to the local government elections in cantonment boards, the report said a draft of the ordinance for amending the Cantonments Ordinance, 2002, empowering the ECP for conducting local bodies elections in the cantonment boards have been prepared by the director general of the military lands and cantonments department. Currently, the draft is lying with the defence ministry for necessary action and the same would be promulgated within a couple of weeks, the report said.