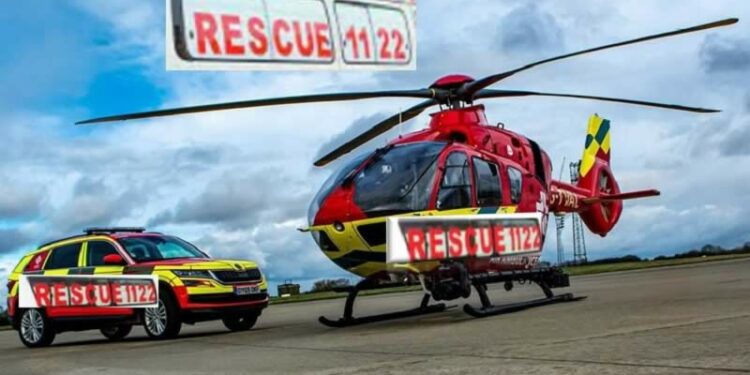 The Punjab government has decided to launch an air ambulance service in the high-risk areas of the province, Director-General Rescue 1122 Dr. Rizwan Naseer told PTV news on Sunday.

He said the provincial authorities are taking all possible steps to further improve the rescue services.

The emergency service is handling over 1,000 road accidents in all districts on daily basis, the Rescue 1122 chief added.

The Punjab government announced last month that it had allocated a budget for the ambulance service in the current fiscal year.

Chief Minister Sardar Usman Buzdar had said that Punjab would be the first province to start ‘Rescue 1122 Air Ambulance’ service. The government had also expanded the scope of rescue service to 86 tehsils while motorcycle ambulance service was extended to 27 districts, he added.

Earlier this month, The Express Tribune had reported that there is an acute shortage of ambulances for emergency and medical use in the Punjab, which happens to be the country’s largest province.

The law dictates that in order for a vehicle to operate as an ambulance, it has to be registered with the Punjab Emergency Services Department.

Even though a total of 4,719 private and government vehicles are currently registered as ambulances in the department’s records, only a few of them are still on the roads. Owing to this, the gap is filled by private vehicles being used in the province as ambulances without any legal permission.

While the owners of these quasi-ambulances have been allegedly charging exorbitant fares for transporting patients and bodies, that too without any formal training in first-aid or emergency medical care.

As per official statistics, the population of Punjab is counted to be around 110 million, but unofficial sources claim that the actual number is close to 120 million. Out of the 4,719 vehicles registered as ambulances in the province, over 2,885 are owned by NGOs, 1,698 by the Punjab government and 136 by the federal government.

However, excise department sources claim that even out of the limited number of registered ambulances, many are lying non-operational or have been taken off the roads.