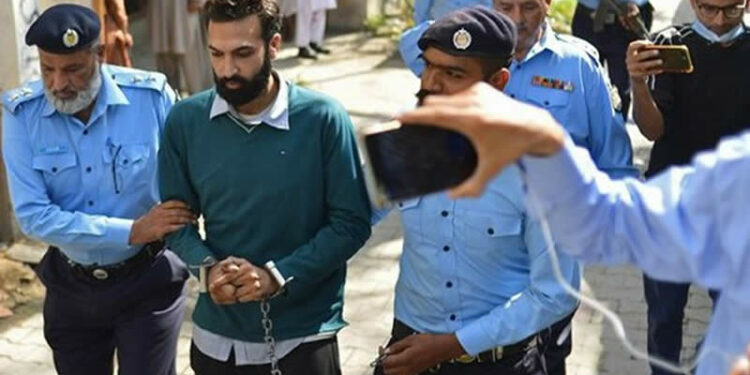 ISLAMABAD: Zahir Jaffer, the prime accused in the Noor Mukadam case, has been awarded the death penalty while his employees Iftikhar and Jan Mohammad were given sentenced to 10 years in prison.

However, Zahir’s parents, Zakir Jaffer and Asmat Adamjee, and the employees of Therapy Works were acquitted by Additional District and Sessions Judge Muhammad Atta Rabbani.

Co-accused Iftikhar and Jan Mohammad, who were working at Zahir’s home as watchman and gardener respectively, were punished for aiding in the abetment of crime. Another employee, Jameel (chef) was acquitted by the court.

The judge announced the verdict in a packed court today which was reserved on February 22. The trial continued for over eight months during which 19 witnesses testified before the court.

Shaukat’s lawyer had said the defense created a whole new story by claiming that Noor and Zahir were in a relationship and that Noor was murdered by someone among the participants of a so-called drug party.

He had further clarified that no such party ever held at Zahir’s house.

He had requested the court to order a sentence of severe punishment for the accused as there was solid evidence against them in the shape of DVR, CDR, forensics, and DNA.

Shortly after the verdict was out, Noor’s father Shaukat Mukadam said a favorable court decision was critical. He said he repeatedly said that this case was not only about his daughter, but was a question of all the daughters of Pakistan.

Shaukat said that he was expecting a favorable decision and that he is glad that the court took the right decision. However, he denied commenting on the suspects who have been acquitted.

Noor’s father said that he was not contacted by anybody regarding a patch-up and even if somebody contacts him now, he will not agree to it.

Replying to a question regarding media trials and support from society, he said that the world was standing with them and his family did not need to put in much effort to highlight Noor’s case.

Talking to journalists before the verdict, Shaukat Mukadam had expressed the hope that the murderer of his daughter will be sentenced and the rule of law will prevail.

He had maintained that he is confident that he would be given justice. The slain girl’s father had prayed for a judgment based on justice.

Timeline
Noor Mukadam, a 27-year-old woman, was murdered on July 20 within the limits of the Kohsar police station in Islamabad’s F-7 area.

The Islamabad police had arrested Zahir on the night of July 20 from his house where, according to Noor’s parents, he had killed her with a sharp instrument and severed her head.

Zahir was formally charged with the crime by the court in October 2021.

Five days after the brutal murder, the police had arrested Zahir Jaffer’s parents Zakir Jaffer, Asmat Adamjee, and other accused in the case on the charges of hiding evidence and aiding in the abetment of the crime on July 25 last year.

Later, CCTV footage of the incident surfaced that shows Mukadam jumping from the first floor of the house and making fleeing attempts in injured conditions to save her life.

In the video, Jaffer can be seen manhandling Mukadam. During the entire horrible episode, none of his employees tried to stop the accused or to save the life of the hostage girl.

The formal trial of the case began on October 20, 2021, and the court decided the case after 25 hearings.

Since his first appearance, the main accused, Zahir Jaffer, had been violating the decorum of the court.

He kept doing strange activities in the courtroom to prove himself as a mental patient so as he could escape from the punishment in the murder case. Despite his all tricks, the police used to bring the accused in the courtroom sometimes on stretcher or wheelchair.

Meanwhile, the accused’s counsel filed a plea seeking his client’s medical checkup but the court rejected his plea. However, a medical team of the jail had declared him physically and mentally fit.