by Top
in Featured, Punjab
0 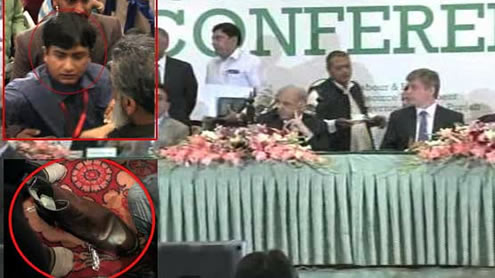 According to the footage, the Punjab CM narrowly escaped being hit by the shoe as it landed near the stage where he was sitting.

The reporter who threw the shoe also held a banner that demanded the arrest of those involved in the attack on Hamid Mir. He was quickly removed from the event by security men.

Meanwhile, the Punjab CM showed no reaction to the incident and remained calm on the stage. Punjab CM is due to address the gathering.

Talking to media, the journalist said he was not ashamed of his act, adding that he flushed out his anger by throwing shoe. Shahbaz Sharif was the chief guest at a three-day SAARC Labour conference in Lahore.

The journalists’ fraternity condemned the incident. One of the journalists said that the Sindh government should be pressed for fair justice, adding that the reporter should have registered his anger in a separate meeting with Punjab CM.