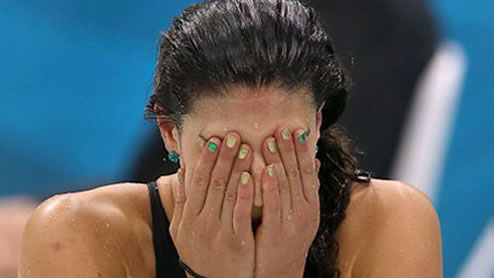 The face of Australia’s pool sprint king on the Olympic podium said it all. James “The Missile” Magnussen, beaten into second place by 0.01s in the men’s 100m freestyle final, looked more like an undertaker than a man who had just won a silver medal.

His failure to win gold – in either Wednesday’s 100m final or the men’s 4x100m freestyle relay (in which the favoured Australian team finished out of the medals) – was symbolic of the country’s disappointing start to these Olympics. A succession of lacklustre results has left the proud sporting, and particularly swimming, nation scrabbling for answers – or, failing that, excuses.  “A lot was riding on my results here, and to have missed out twice is pretty shattering,” said Magnussen after the 100m final.

“I guess having a such a successful young career, I just felt pretty much bullet proof coming into these Olympics and it’s very humbling.”Newspaper headlines spoke volumes: “Heartbreak”, “Agony”, “Humbled”. Australians have come to expect the swimming competition to start the country’s Olympic campaign off with a bang. Since Sydney in 2000 gold medals have come thick and fast, courtesy of some of the greatest swimmers of all time such as Ian Thorpe, Kieren Perkins and Grant Hackett. But these Olympics have been a reality check. Not since 1976 has the team failed to win an individual gold medal in the pool.

“It’s starting to become the silver Olympics for the swimming,” said one television commentator, Rebecca Wilson.  Forensic analysis began quickly of why Magnussen didn’t win. Ian Thorpe suggested Magnussen had curled his hand rather than holding it straight on his touch. Other commentators criticised him for being overconfident before the Games.  “He said if he didn’t go home with two gold medals he wasn’t going to be happy,” said the former Olympic swimming champion Susie O’Neill, covering the swimming for Australia’s Fox Sports network.

“It’s difficult when you say that before a race and you don’t get that.  “I can’t help but think if he had come in a little bit quieter and not mouthed his intentions or answered so honestly to the questions that he thought he was the favourite to win, that he might have gone a bit better.”  Wilson said: “When you flag your intentions to the rest of the world … someone’s going to come and get you, aren’t they.” She criticised Magnussen for not being more gracious and upbeat during the medal presentation.  The Brisbane Times newspaper said that for Magnussen this second disappointment was “sufficient to create a lifetime of second-guessing, recrimination and regret”.

Magnussen is not alone in disappointment in the pool. Backstroke 100m silver medalist Emily Seebohm, favourite for gold, wept in her post-race interview. “I guess when you swim that fast in the heat, then people put pressure and more pressure on you, saying: ‘Oh, you’re going to get the gold.’ Maybe I just started believing that and just thought I’d already won by the time I had swum and I hadn’t even swum yet. “I had never been this nervous, but at the Olympics you’re going to be as nervous as you are ever going to be.” The distraught Seebohm, casting about for answers after the race, even blamed a fixation with Twitter and Facebook for making her overly confident.

“I don’t know, I just felt like I didn’t really get off [social media] and get into my own mind,” she said. “When people start telling you are going to win gold, you are going to start believing it. When they tell you a thousand times you are going to get it, somewhere in your mind you are just like: ‘I’ve done it.’ “But I hadn’t and that was a big learning curve and I obviously need to sign out of Twitter and log out of Facebook a lot sooner than I did.” Another medal hope, Stephanie Rice, the two-time Olympic champion and poster girl of the Australian team, failed to win a medal in her pet events, the 200 and 400m individual medley, after battling a shoulder injury. In a teary post-race interview she even said she would consider whether to keep swimming beyond the Games.

“I definitely walk away from these Olympics disappointed with results and times, but really proud of the effort and the energy that I put into getting back up to this point,” she said. Melbourne Herald Sun commentator Jon Anderson told BBC World News the Olympic performance so far was a disaster. “I think it’s going to be deemed as a failure, it’s going to be looked at and certain people would be worried about their jobs I should imagine. “For different reasons we haven’t performed as well. There will be questions asked. I think certain swimmers have succumbed to the nerves of the event. “The Australian expectation was we would win gold clearly … it’s probably the greatest disappointment in my time.

“Stephanie Rice went over there as one of the favourites for the 200 and 400 metre IM [individual medley] but had a shoulder injury. She swam very bravely but wasn’t really quite up to it.” Rice won three golds in Beijing. Away from the pool there have been other disappointments. Australia’s defending gold medalists in the men’s rowing double skulls failed to qualify for the finals. Five-time Olympian Nathalie Cook and her beach volleyball partner Tamsin Hinchley were bundled out of the event, bringing more tears. “It’s disappointing that it’s not enough and I’d love to be playing further in the tournament, but you’ve got opposition out there trying to stop you and … I don’t have any words for it right now.” Australia is 15th on the medal table but shouldn’t really be surprised, given that it has sent its smallest Olympic team to compete at the games in 20 years.-Guardian

London 2012: more boos as boxer is knocked down five times but wins