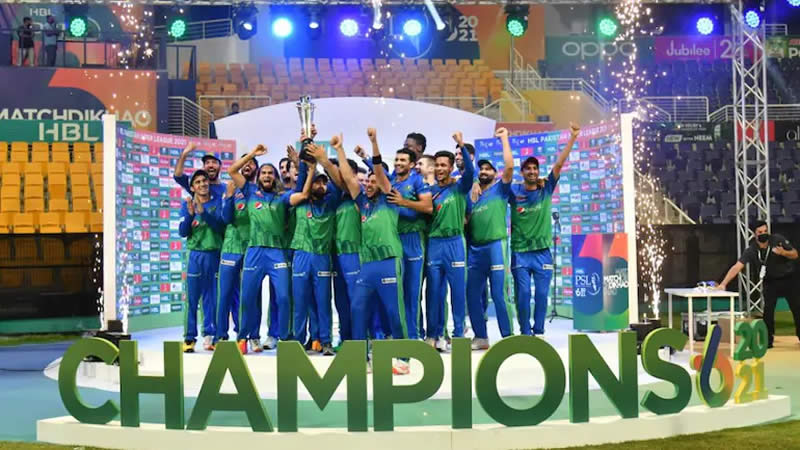 Peshawar Zalmi were left heartbroken for the third time in four seasons as Multan Sultans outclassed them by 47 runs in the final to clinch their maiden HBL Pakistan Super League crown at the Sheikh Zayed Cricket Stadium in Abu Dhabi on Thursday.

Chasing a record target of 207 in a decider, Peshawar’s reply never got going as a daunting asking rate of over 10 runs an over proved too much for them.

Their hopes vanished quite early in the last of Powerplay overs when towering pace bowler Blessing Muzarabani dismissed Hazratullah Zazai for just six. Muzarabani was clever enough to change his pace and the slower ball was cut by Zazai towards Shan Masood at short point.

The demise of the Afghan left-hander, who had been in red-hot form, struck Pesha­war like lightning and there was no comeback after that.

Earlier Multan had rattled up 206-4 on the back of blistering half-centuries from Sohaib Maqsood and Rilee Rossouw.

The joy on the faces of Multan players was obvious because it became a virtual one-way traffic for Moham­mad Rizwan’s charges while Peshawar limped to their third successive defeat in a final — the 2017 title winners were humbled by Islamabad United and Quetta Gladiators in 2018 and 2019 respectively.

The wily former South African spinner Imran Tahir drove the last nail in Peshawar’s coffin by picking three wickets in his last over to finish with 3-33. The only semblance of fight came from Shoaib Malik, who waged a lone battle by striking 48 off 28 balls (three sixes and three fours). He shared the only substantial partnership of the innings — 66 in 30 balls — with Rovman Powell (23).

Multan put up a scintillating exhibition of power-hitting coupled with deft touches, through Sohaib and Rossouw to comfortably cross the magical 200 mark. The third-wicket partnership of 98 in just 44 balls between them left Peshawar in a daze as the rampant Multan batting plundered 116 runs from the last eight overs, thanks to sizzling strokes from Sohaib and Rossouw. Khushdil Shah rubbed more salt into Peshawar’s wounds by smacking two consecutive sixes off Amad Butt, who went for 21 runs in the final over.

Multan, who were languishing on the fifth spot when the Karachi leg was suspended in March, made it to the decider by winning five out of six matches on the Abu Dhabi leg, while Peshawar faced a bumpy ride, losing twice at the start.

But on the biggest night of the competition Multan, as expected, chose to field an unchanged XI but Peshawar had to alter their side after Umaid Asif became unavailable because he breached the bio-secure bubble protocols on Wednesday. Fellow seamer Sameen Gul replaced him.

Wahab Riaz got his wish fulfilled when the Peshawar skipper called correctly at the toss, and straightaway opted to bowl. He must have been mindful of the fact that his team had won both Eliminators — against Karachi Kings and Islamabad United — by chasing and also that four previous finals had gone to the side batting second.

Both Shan Masood and Rizwan took time getting out of their blocks against a one-dimension bowling attack as Peshawar opted for an all-pace attack. Shan did strike three boundaries in the fifth over — delivered by Sameen — after Rizwan had deposited Mohammad Irfan over the square leg boundary in the previous over for the first maximum of the innings.

However, desperation finally got to Shan when he tried an ugly hoick against emerging left-arm seamer Mohammad Imran and was gone for a 29-ball 37 (six boundaries) to end a stand of 68 from 52 deliveries.

Rizwan, who scored run-a-ball 30 (two fours and one six) and also became the first player this year to cross 1,000 runs in all T20 cricket, soon followed his opening partner when Imran forced him to chase a wide delivery.

Rizwan scored 500 runs with the bat in the tournament and made 20 dismissals in 12 matches.

And then came the fireworks from Sohaib and Rossouw.

He celebrated his inclusion in Pakistan’s white-ball squads for the coming tours of England and the West Indies in great style, hitting 65 off 35 balls with the aid of six fours and three sixes.

Rossouw, along with Sohail Tanvir, was part of the Quetta Gladiators’ title-winning side two years ago when Sohaib played in the final at Karachi for Peshawar. He was severe on the Peshawar bowling as the ex-South African belted a hurricane 50 from only 21 deliveries with five fours and three sixes. The first six was a breathtaking scoop behind square leg off Amad.