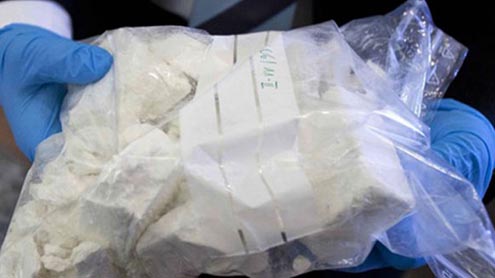 The International Narcotics Control Board (INCB) says new routes for heroin smuggling are emerging through the Southwest Asian region, as the drug is being smuggled out of Afghanistan via Iran and Pakistan and then trafficked to Iraq and other countries in the Middle East. According to the INCB annual report published on Wednesday, the use of new routes by smugglers has been confirmed by the national data which indicate that heroin seizures in Lebanon increased from less than 3kg in 2008 to more than 20kg in 2012, and seizures in Oman came to nearly 100kg in 2012, compared to less than 9kg in 2008. The report also reveals an increase in seizures in Bahrain; in most cases the heroin is ingested by the so-called “mule smugglers” arriving from Pakistan.

A large number of parcels containing heroin and sent through courier service were also seized. The parcels were sent to the United Kingdom and Greece from Afghanistan and Iraq. The INCB says that West Asia remains the hub of the global illicit opium economy. Illegal poppy cultivation in Afghanistan set a new record in 2013 by reaching 209,000 hectares, six per cent more than the previous year. More than half of Afghanistan’s 34 provinces now cultivate illicit poppy and production of opium in the country last year jumped by 49 per cent over the previous year, to 5,500 tons, even as poor weather conditions persisted. Meanwhile, methamphetamine abuse has been identified for the first time in Pakistan, where an estimated 22,000 adults abused the substance in 2013.

Bartering heroin for cocaine is an emerging phenomenon in Pakistan. Cocaine enters the country via Africa, East Asia and Europe. The first study to generate data on the use of amphetamine-type drugs in Pakistan has revealed a new pattern of consumption; an estimated 22,000 adults abuse amphetamine-type stimulants, often methamphetamine. Compared to other national estimates, opiate use is very high in Pakistan, with one per cent of the population using heroin or opium and 1.5 per cent abusing opioid-based painkillers for non-medical purposes over the last year. There are about 420,000 people who inject drugs in Pakistan, which is 0.4 per cent of the adult population.

Estimates by the UN Office for Drugs and Crimes (UNODC) suggest that 44 per cent of Afghan heroin is smuggled via Pakistan, 32 per cent via Iran and the remaining through different Central Asian countries. Heroin seizure by the Central Asian authorities has steadily declined since 2003, primarily due to the decreases reported in Tajikistan, suggesting the expansion of other trafficking routes. Increasingly, maritime routes are being used for smuggling Afghan heroin via ports in Iran and Pakistan, with countries in East Africa a frequent destination.

There are indications that illicit drug shipments may be increasingly smuggled through the Middle East, particularly through Iraq, which has become a major hub in the drug trafficking route leading from the ‘Golden Crescent’ (Afghanistan, Iran and Pakistan) to the Gulf states, Lebanon and Syria. The report expresses concern over the rapidly developing market of synthetic drugs and the emergence of new psychoactive substances in the Middle East, including synthetic cannabis (called spice). Incidents of smuggling attempts and seizures of such substances have been reported by Bahrain, Israel, Jordan, Oman, Saudi Arabia and the UAE.  Dwan