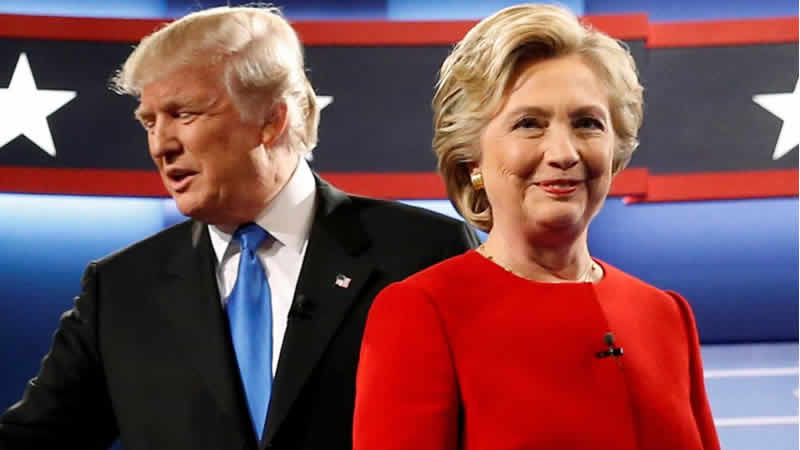 Clinton, Trump fight for soul of divided US before election

Hillary Clinton and Donald Trump brought their brutal White House battle to a crescendo Monday, their campaigns peaking with huge rallies showcasing starkly different visions for the future of the world’s greatest power.

As foreign capitals looked on in grim suspense, and with Tuesday’s poll hanging in the balance, the 69-year-old Democrat gathered a galaxy of political and show business star power in Philadelphia, birthplace of the republic, to urge unity. Tomorrow, we face the test of our time,” she declared in front of 40,000 people, a record for her in a campaign where she has maintained a narrow opinion poll lead but has had less success than her Republican opponent in turning out passionate crowds. There is a clear choice in this election. A choice between division or unity, an economy that works for everyone, or only for those at the top; between strong, steady leadership, or a loose cannon who could put everything at risk.” At the same time Trump, the 70-year-old tycoon who turned his conservative party into a vehicle for populist bombast, concluded a last-gasp tour of swing states by painting his rival as doomed to defeat and the corrupt creature of a discredited elite. Do you want America to be ruled by the corrupt political class, or do you want America to be ruled, again, by the people?” he demanded, at a rally in New Hampshire, a state won in 2012 by President Barack Obama that Trump hopes to flip into his column.

Promising to end “years of betrayal”, tear up free trade deals, seal the border, halt the drug trade and exclude all Syrian refugees, Trump told his supporters: “I am with you and I will fight for you and we will win.” Some 40 million Americans have already cast ballots in states that allow early voting, and tens of millions more will turn out on Tuesday to end what has become a long, gruelling and divisive campaign that has stirred dark undercurrents in the electorate. Clinton remains favorite to succeed Obama and become the United States’ first female leader. But her campaign she has been dogged by allegations that she put US secrets at risk by using a secret private email server while at the State Department and the race remains perilously close in a handful of key states. Support for Trump dropped fell footage emerged last month showing him bragging about having sexually assaulted women, but polls have tightened as the big day approaches.

For the keynote rally of her last night on the trail, Clinton was joined by Obama and his wildly popular first lady, Michelle, and iconic American rock star Bruce Springsteen, who urged fans to stand with Clinton “on the right side of history.” Obama also did his bit to the pave the way for his former top diplomat to replace him in January, declaring: “I’m betting that the wisdom and decency and generosity of the American people will once again win the day and that is a bet that I have never, ever lost.” Trump sneered at Clinton’s choice of pop stars to attract crowds claiming it was demeaning to the political process and stuck to his stump speech, each new version slightly more aggressive than the last but each hammering to same points. We’re going to be ruled by the people, folks. That is going to be the choice. Our failed political establishment has delivered nothing but poverty, nothing but problems, nothing but losses,” he said. It’s time to reject the media and political elite that has bled our country dry,” he declared, pointing to the press pen at his event, and whipping up cries of “Drain the swamp!” from his fervent supporters. -arynews