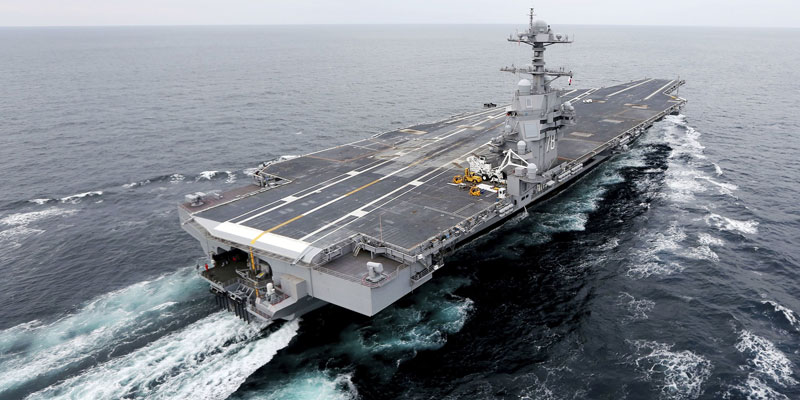 The USS Nimitz carrier has been pulled out of the region potentially easing heightened tensions with Tehran.

US President Joe Biden’s administration has pulled an aircraft carrier out of the Gulf in a move to potentially ease tensions with Iran, which had soared under former President Donald Trump.

Pentagon spokesman John Kirby said on Tuesday the USS Nimitz Carrier Strike Group had sailed from the US military’s Central Command in the Middle East to the Indo-Pacific Command region.

Kirby did not confirm reports the Nimitz was headed back to the United States after some nine months at sea.

But he indicated that, after the Trump administration ramped up the US military presence in the Gulf, the Biden administration did not see keeping the carrier there as necessary for US security needs.

Kirby declined to discuss the Pentagon’s current assessment of a potential Iranian military threat to US bases or Gulf allies.

However, he said: “We don’t make decisions like this lightly.”

Secretary of Defense Lloyd Austin “believes that we have a robust presence in the Middle East to respond” to any threat, Kirby added.

Kirby would not say if the Nimitz would be replaced in the region in the near future, noting the US Navy has a limited number of aircraft carriers.

The move came after the US reversed a decision last month to bring the aircraft carrier home from the Gulf, with the Pentagon saying due to “recent threats” by Iran, the USS Nimitz would stay in position.

Iran has conducted military exercises and war games in the past several weeks amid the heightened tension between Tehran and Washington and its regional allies, particularly Israel. Last month, Tehran carried out the fifth military drill in two weeks as the US flew nuclear-capable B-52 bombers over the Middle East.

Iran has also boosted its nuclear activity in the past few months, drawing concerns from the new US Secretary of State Antony Blinken, who told NBC News on Monday Tehran could be months away from developing enough “fissile material” for a nuclear bomb.

The Biden administration has expressed interest in reviving the 2015 nuclear deal with Iran, from which Trump withdrew and slapped back punishing sanctions.

Iran has demanded Washington first lift the sanctions before talks could be resumed.

Speaking from Tehran on Wednesday, Iranian President Hassan Rouhani said that the nuclear deal would remain unchanged with only the original signatories to the deal taking part in any talks.

“If they [the US] want it, they can come join. If they don’t want it then they can go back to their own lives and we’ll go about our business,” said Rouhani.

Meanwhile, Israel has opposed the nuclear deal. Last month, a top Israeli general warned attack plans against Iran were being revised and said any US return to the 2015 nuclear accord with Tehran would be “wrong”.