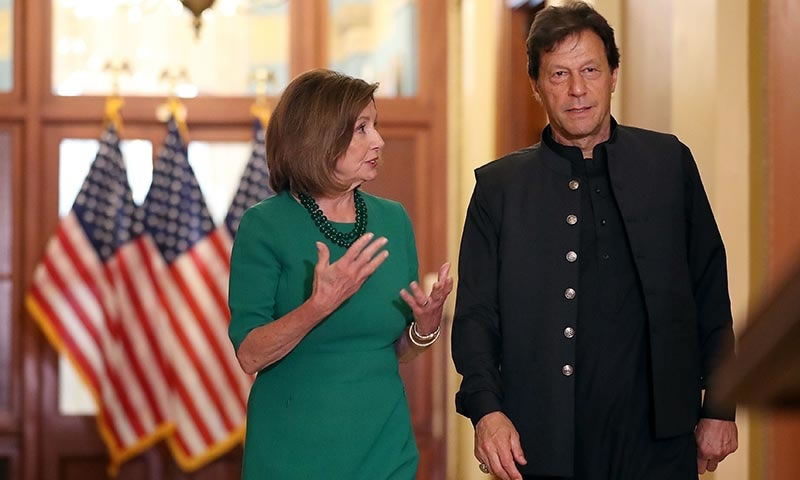 Prime Minister Imran Khan on Tuesday addressed members of the US Congress at Capitol Hill, soon after which he departed for Pakistan, wrapping up his three-day visit to Washington.

The premier attended a reception with a large number of senators and members of US House of Representatives at Capitol Hill on the invitation of Congresswoman Sheila Jackson Lee, the chairperson of Congressional Pakistan Caucus.

Ahead of Prime Minister Imran’s address, US House Speaker Nancy Pelosi said she was introduced to Pakistan during her time at university when another student, dressed in a sari, told her to read books in the library on Mohammad Ali Jinnah, through which she had learned about the “greatness of the statesmen”.

Pelosi said that the relationship between Pakistan and the United States was an “important one”.

As she welcomed the premier, Pelosi thanked Pakistan for the “beautiful gift” of Pakistani Americans that the country had given to the US.

She thanked the premier for his leadership with regards to reconciliation efforts between Pakistan, Afghanistan and the Taliban, and for advancing “enduring peace in the region”.

The premier thanked Pelosi for extending the invitation and for giving him a chance to share Pakistan’s point of view.

“So far, I feel that Pakistan has not really been represented properly in the US. I feel that it is time to have a different sort of relationship with the US — a reset,” he said.

A meeting was also held between Prime Minister Imran and Speaker Pelosi, attended by Foreign Minister Shah Mahmood Qureshi and other officials.
‘Whole country is behind me’

In his address at Capitol Hill, the premier shared that the “whole idea” of his visit to the United States was for Americans to have a better understanding of Pakistan.

“Pakistan is not understood here, specifically in the last 15 years when this ‘War on Terror’ was being fought in Afghanistan and on the borders of Pakistan.

“What I hope is that by the time I leave, I would have made people here understand our point of view.”

The premier said that Pakistan was now trying its best to get the Taliban on the table to start dialogue.

“Pakistan has the same objective as the United States of reaching a peaceful solution in Afghanistan as quickly as possible.”

He acknowledged that this would not be easy but assured the attendees that Pakistan would try its best.

“The whole country is standing behind me — the Pakistan Army, the security forces, all are behind me. We all have one objective and it is exactly the same objective as the US: to have a peaceful solution as quickly as possible in Afghanistan.”

The premier said that it was important that he met US President Donald Trump and Secretary of State Mike Pompeo, who he had told that moving forward, the relationship between the two countries has to be based on mutual trust.

“I will be telling the US what we can do in the peace process.

“I hope that from now on, our relationship is on a different level […] it was painful for us to watch the mistrust between the two countries.”

PM Imran said that 70,000 Pakistanis had been killed in the war and the Pakistani economy had incurred losses of billions of dollars when the country was “fighting the US War on Terror”.

“Pakistan had nothing to do with 9/11; Al Qaeda was in Afghanistan, there were no militant Taliban in Pakistan. But we joined the US war.

“Where I blame my government [is] that we did not tell the US exactly the truth on the ground.”

He said that part of the reason for this was that 40 different militant groups were operating in Pakistan and the governments weren’t in control.

“So while the US expected us to do more and help [the] US win the war, Pakistan was at that time fighting for its own existence.”

As he concluded his remarks, Prime Minister Imran said: “We hope from now our relationship will be completely different and rest assured, I will make sure that our relationship is now based on truth, on trust.

“I hope that we again get back to the relationship that was based on closeness, on trust, on mutual respect.”