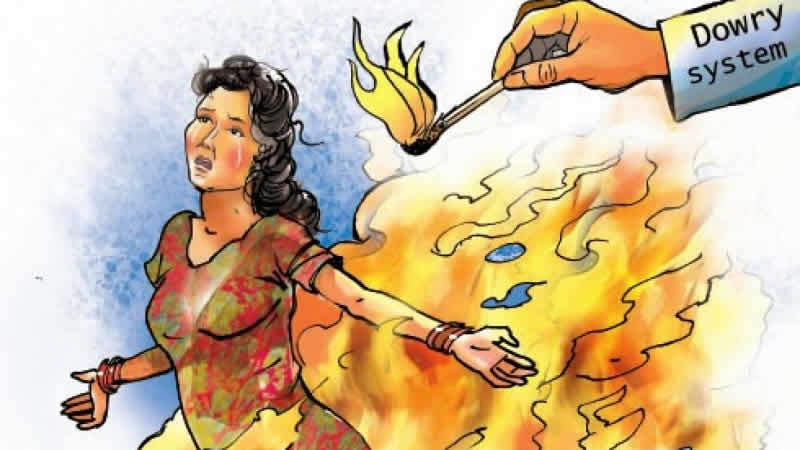 Let us strive against dowry

In our society there are numerous problems like superstitions, illiteracy, cast system, dowry system etc. It is surprising that even in these days of the 21th century; we are still drowned in the dark depth of these evils. One of the worst evil of our society is Dowry. What is dowry?

Dowry means the property and the money that a bride brings to her husband house at the time of her marriage.” The dowry at present is the source of both joy and curse in the society. It is also a joy to the husband and his relatives who get cash, costly dress and utensils, furniture, bedding materials, etc. but it is a curse to the bride’s parents who have to bear enormous cost to satisfy the unreasonable demands of bridegroom’s party.

When more pressure is put on brides parents, their dear daughters has no other option but to commit suicide to avoid more insult and torture both mentally and physically by members of husbands family. The main reason fathers think if I don’t kill her today; tomorrow she will kill me financially or someone else will burn her for the sake of dowry! Doesn’t this malevolent speculation assassinate a father’s vivacity? Such is the evil of dowry, rampantly prevailing in our society.

The birth of a female child is viewed as a curse! Why? As a Muslim, we should consider the birth of daughters to be great blessing. Holy Prophet ﷺ has promised heaven or paradise for bringing up a daughter. Marriage is becoming a big source of exploitation and of getting rich overnight. The spread of education has not helped in curbing the social evil of dowry. The more highly educated is the Youngman; higher are the demands for the dowry. The Holy Prophet instructed the believer’s


On contrary to the popup topic; the Holy Quran says
“And give the women (on marriage) their dower as a free gift” (Al-Quran : Al-Nisa :4)
Dejectedly, today’s situation has endorsed the excruciating concept of dowry. While Islam mentioned;

“The best of marriage is the simplest”


In Islam dowry is Mahr and it’s for women not for man. Mahr is mandatory payment, in the form of money or possessions paid or promised to pay by the groom, or by groom’s father, to the bride at the time of marriage.


Than why are we so reluctant and hesitant to follow what the greatest personality of the universe said and did? The believers of Islam should deny the act of jahliya, the act of shamelessness and the acts which leads to fitnah and can never make your marriage successful and blessed! One may follow the golden path shown by Allah and his Prophet ﷺ to survive a sanctified and beautified sacred life.

Various Non-Governmental organizations are working for preventing this cruel crime of dowry system and have succeeded a little bit but still could not be able to completely remove it from our country. Thus, we all should be united and take this issue as serious as any other issue in our life whether we have a girl child or not. Dowry system is a common problem for all in our country that is much hazardous for a girl.
Be a man say no to dowry.

CONCLUSION:
we have passed so many centuries with this tradition of “Dowry System” including its harmful effects on us and our future generations, but it’s never too late, now it is right time to come together for fighting against this one of the major crime which still has its root in all places of our country.

PM To Attend Belt And Road Forum In China