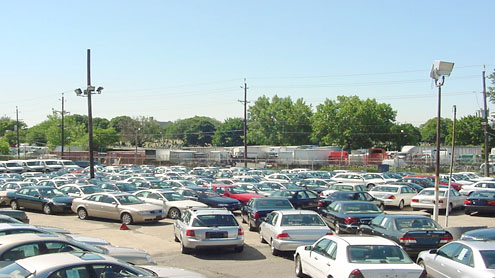 KARACHI: The government’s decision to allow import of used cars does not seem to give a “choice of cheap cars” to the consumers — as arrival of recent imported cars has not shown any major difference in prices of locally made cars and imported ones.A random survey to the local used cars showrooms (now mostly comprise of imported cars) revealed that the price difference in the most popular 650cc-1300cc category cars in imported and locally made cars is hardly more than Rs 50,000. However, the imported one is five-year old car.It is learnt that in imported cars category of 650cc cars include Esse and Meera by Toyota, Alto, Avery and Vegnar by Suzuki and Life by Honda and many others are available in the range between Rs 550,000-600,000. The prices of new models of 800cc locally made cars are less than imported cars as the most popular Mehran VXR CNG by Suzuki costs Rs 560,000 in the local market. The 800cc Ravi (pick up) costs Rs 488,000.Similarly, if talk about cars in imported 990cc cars Vitz now costs Rs 850,000-Rs 900,000, Belta available at Rs 950,000-Rs 1,050,000 and Passo cost is Rs 750,000. As against these imported cars locally made 1000cc Alto VXR CNG is available at Rs 720,000 and Cultus VXL price is Rs 906,000.The 1290 cc imported car X Corolla by Toyota is available at Rs 1,250,000-Rs 1,350,000 as against locally made 1300cc Liana, which is priced at Rs 1,239,000.An auto dealer at Kashmir Road said that for the first time in his life he has witnessed that all models of local car manufacturers are available at major showrooms. He said that we use to book the cars for customers earlier and inform the car manufacturer of the order and we get the car when our turn comes as there was a huge demand, however, the things have changed drastically as the demand has decreased substantially during last few months.He was of the view that the buying power of a common man has been reduced significantly and a car for an average middle class family is becoming a luxury and they are focusing more on necessities.“Importing more cars when there are many used and new cars already available at the showrooms would only result in loss of foreign exchange,” he added.In 2005-2006, when import on used cars up to 5 years old was relaxed, 46,278 cars were imported to Pakistan and this time when heavy investment likely to assist the auto dealers, massive number of cars are expected to land in Pakistan.

Experts say that the relaxation is meant not to benefit the low-end consumers at large scale but to the privileged class only who prefer to use luxury cars and ready to pay heavy duties. The previous statistics clearly reveal the tendency of buying of imported luxury cars outnumbering the sale of up to 1000 cc cars. The relaxation will also negate the government’s policy to discourage the usage of luxury cars.An auto part maker said that the government is not adhering to its policies consistently, frequent changes as far as import of used vehicles is concerned not only poses severe threats to the local auto industry and vendors but gesturing no friendly and conducive environment in Pakistan for the new entrants in the Auto sector as well – Dailytimes