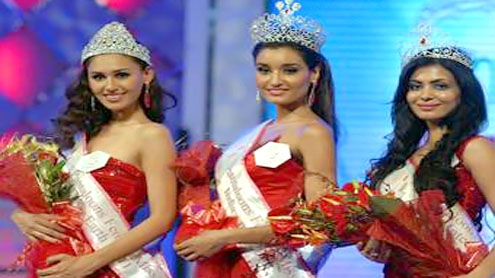 Forty-six years have gone by, but the passage of time does nothing to dim the glow of the foremost beauty pageant of the country. The winners of the Pantaloons Femina Miss India (PFMI) 2011 pageant were declared at a star-studded event at Mumbai’s Mehboob Studio.Fittingly, two girls from Mumbai won titles on Thursday night. PFMI World Kanishtha Dhankhar and PFMI International Ankita Shorey are both from Maximum City. Delhi’s Hasleen Kaur was crowned PFMI Earth. In answer to the final question, ‘There is a lot that children can learn from mothers but what can mothers learn from children?’ Kanishtha said, “Children can learn everything from mothers and vice versa. We live in contemporary India where we have a voice and a choice. Mothers can learn to dream from us, we can set an example for them.”

The PFMI 2011 winners were crowned by PFMI World 2010 Manasvi Mamgai, Miss Earth 2010 and PFMI Earth 2010 Nicole Faria and PFMI International 2010 Neha Hinge. Tarun Jha, head of marketing, Skoda Auto India, handed the winners the keys of the Skoda Fabia as their grand prize.The springtime colours of April came to life as the 20 finalists walked the ramp in the Ra’ gemstone collection designed by Rajesh and Anirban. Hosts Manish Paul and Sonu Sood welcomed the ladies whose show of confidence likely concealed some serious jitters. This was followed by another spectacular show in white and ivory georgette saris designed by RMKV. Round three saw the girls walk the ramp in scarlet evening gowns by Gaviin C Miguel. As the girls sashayed on stage, one of them lost her shoe, only to have judge Fardeen Khan find it and slip it back on her foot. The Cinderella moment drew spontaneous applause.

The importance of India’s first and foremost beauty pageant which is now in its 47th year can hardly be underestimated, and this was visible in the line-up of star performers who took the stage through the evening. Sonakshi Sinha performed to a medley of songs, including Chura Liya Hai Tumne — perhaps a tribute to former Miss India Zeenat Aman. Punjabi rapper Hard Kaur and a bunch of semi-acrobatic dancers grooved to Laung Da Lashkara. Malaika Arora Khan did her Munni Badnam act, with Dabangg co-star Sonu Sood egging her on. Anushka Sharma danced to Haule Haule, while Sunidhi Chauhan sang Heartbeat.Amidst the bunch of 500-odd spectators, it was a small cluster of seats facing the ladies that occupied their attention. The army of judges included Prachi Desai, Kangana Ranaut, Fardeen Khan, Dino Morea Ritu Kumar, Leander Paes, Tarun Mansukhani, Sajid Nadiadwala and Shiamak Davar. Nadiadwala declared Ankita Mohapatra the winner of the Bollywood Diva title. The lucky girl will be cast in a film under the Nadiadwala Grandsons Entertainment banner.

The crowns for the pageant were designed by Forever Jewellery. The PFMI 2011 contestants underwent an intensive 30-day training session at Novotel, Mumbai Juhu Beach. An accomplished team of experts led these youngsters through the task, namely diction expert Sabira Merchant, cosmetologist and dermatologist Dr Jamuna Pai, smile care expert Dr Sandesh Mayekar, fitness expert Yasmin Karachiwala, rampwalk trainer Alesia Raut and creative director of PFMI 2011, Marc Robinson. The official photographer was Jitu Savlani while the designer and stylist was Gaviin C Miguel. Hair and make-up was taken care of by experts Bharat and Dorris while image and makeover was managed by stylist Queenie Singh. Bharat and Dorris also did the hair and make-up of all contestants at the finale. Prasad Bidappa was contestant advisor.The Bollywood Diva Panel comprised Sajid Nadiadwala and Nadiadwala Grandsons as talent partner, Anupam Kher and Actor Prepares as acting mentor and Shiamak Davar as the guru of modern and contemporary dance.