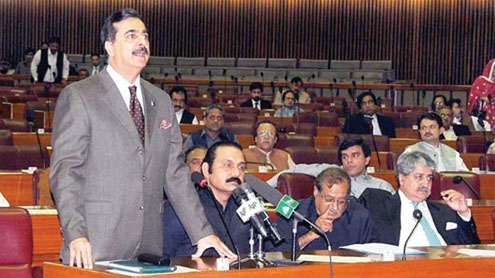 ISLAMABAD: The joint sitting of parliament was once again taken hostage on Thursday, when the US bounty on JuD chief Hafiz Saeed and President Asif Ali Zardari’s upcoming ‘private’ visit to India on April 8 hijacked the debate on resetting ties with the US.

Prime Minister Yousaf Raza Gilani ruled out any action against the Jamaat-ud-Dawa (JuD) chief Hafiz Saeed after the US announced a $10 million bounty on him, saying it was Pakistan’s internal matter and the country’s judiciary would only examine the matter if Washington shared evidence against him.In what was termed a policy statement during the joint sitting of parliament, the premier termed the US bounty on Saeed ‘unfortunate’ at a time when Islamabad and Washington were trying to repair damaged ties.

“Such negative messages will increase the trust deficit at a time when the parliament was engaged in framing new rules of engagement with the US,” the premier told parliamentarians after opposition MPs called the US decision ‘foolish and arrogant’.The unusually prolonged joint parliamentary sitting was being held to approve a parliamentary panel’s report to reset ties with the US after last year’s Nato airstrikes on two Pakistani border posts killed 24 Pakistani soldiers.

Gilani became the highest government official to join a chorus of ‘guarded’ condemnation of the US bounty after the foreign ministry on Wednesday called upon Washington to share ‘concrete evidence’ against Saeed, who is accused of plotting the 2008 Mumbai attacks.The US bounty on Saeed comes at a time when parliament is struggling to cope with public opinion against the reopening of Nato supply routes. Gilani said the development had emerged as a ‘negative message’ at a very critical moment in time.“Positive statements should come from America — a move which may pave the way for both (Pakistan and the US) to rebuild relations.”

Meanwhile, Foreign Minister Hina Rabbani Khar also voiced her criticism against the US move, saying evidence should have been shared with Pakistan before taking the unilateral action of announcing a bounty.Earlier, Leader of Opposition in the National Assembly Chaudhry Nisar Ali Khan termed the US move a mind boggling announcement, claiming there was no case or allegations against Hafiz Saeed in any court.“The issue should be debated by the Parliamentary Committee on National Security as well,” he proposed.

Reacting to objections raised by opposition MPs, Gilani said President Zardari had undertaken the India visit in his private capacity, adding that the president was not seeking to arrange any secret talks with the Indian leadership.“We are as patriotic as anybody else. We will not do anything against the country’s national interest. Nobody should have doubts about it,” Gilani said after the opposition sought an explanation on the president’s upcoming India visit.

The foreign minister also reiterated that the president’s trip was planned in his personal capacity, adding that it was only out of tradition that the Indian Prime Minister Manmohan Singh had invited him for lunch during his visit.Gilani promised to take the parliament into confidence if the president discussed something substantial with the Indian prime minister.