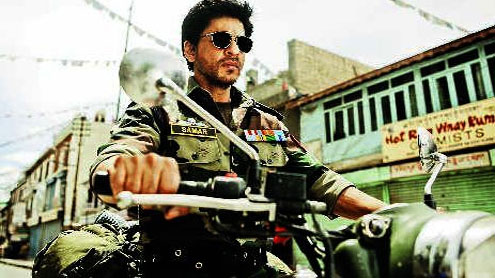 SRINAGAR: Filmmaker Yash Chopra has returned to Kashmir to shoot a film after 25 years. Accompanied by wife Pam and son Aditya, he also has a special gift for Kashmir: Bollywood superstar Shah Rukh Khan on his first professional assignment in Kashmir.

Khan plays an Army bomb disposal expert. Accompanied by a 150-strong crew, Chopra will shoot in Srinagar, Pahalgam and Gulmarg.”We have a three-tier security ring including police commandos for proximate security,” said a government source. For the government, it’s the culmination of years of effort to convince Bollywood to return to Kashmir. In 2004, a delegation of filmmakers like Manmohan Shetty and Ramesh Sippy were hosted to return to Kashmir without any result. But, two years of calm, and the absence of militant violence, seems to have done the trick this time. For the first time in years, there was no strike this August 15.

In a land without cinema halls, film buffs are eagerly awaiting the arrival of the crew. Many are keen to take their children to see the shooting. “I want to take my kids to the sets. They are huge Shah Rukh fans. And this is an experience that I, as a child, was used to in Kashmir,” said a shopkeeper.

The symbolic value of film-maker Yash Chopra’s return to Kashmir after 25 years isn’t lost on anyone. From the government to tour operators, everyone is keeping their fingers crossed. “It’s a Rs 1,000 crore business. If it takes off, it shall provide jobs and take tourism to the next level. Bollywood was always Kashmir’s best brand ambassador,” said Nazir Bakshi, owner of one of the biggest travel firms in Srinagar.

This Eid was the most festive and relaxed Kashmir has seen in two decades. Hour-long traffic jams, crackers, and late night dinners — it was as if Kashmir was making up for the last 20 years. So, is peace here to stay? Are the new hotels and bookshops, hoardings for wedding planners that dot the city, a sign of peace? Or is this yet another false dawn?

These questions are being debated in living rooms here this summer. In many ways, Kashmir is at the crossroads: Peace and material prosperity that goes with it, or tehreek and its attendant isolation? Central to this dilemma is the fear among many that a closer embrace of the Indian economy will drown out azadi. It’s the latest formulation of a very old question: What does Kashmir want?

Bijli, sadak, pani, factories and jobs, all rest on the continuance of this peace. Kashmir has a lot of catching up to do for the lost years since 1990. The lure of a growing India is also now starkly contrasted against the many plights of a pillar of Kashmir insurgency: Pakistan in the middle of an existential crisis.

But as one saw in 2011, normalcy and its signs are also a threat. Sometimes it can be something as trivial as a book festival. For the separatists, this debate is also a battle for relevance. Without the shadow of the militant gun, without the constant tension of hartals and deaths, how many people will listen to them?

Although publicly avowed to a “peaceful struggle”, this creeping peace also holds another fear: embrace of Indianness which doesn’t mean the Indian Constitution, but India’s culture as the Islamists understand it. Cellphones aren’t tools for communication; they encourage illicit meetings between boys and girls. The recent Islamist cautioning of tourists against wearing “skimpy clothes” was understood here as a warning to Kashmiri girls to not wear jeans.

“Destination weddings” now see girls like Pooja Aggarwal, an MBA student, choosing Kashmir over exotic destinations like Mauritius. Getting in Punjabi stars and Lucknow dancers for a five-day gala wedding with a mix of Marwari food — all the result of that very American concept, the wedding planner. So are Aggarwals cultural invaders? Or are they high spending tourists?After 22 years Kashmir, is at the crossroads. The road less travelled shall decide the next 22 years. And only Kashmiris can decide which way they walk.