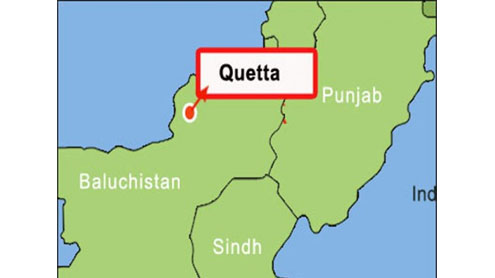 According to DIG Investigation Hamid Shakeel, GSP Deputy Director Muhammad Mohsin Kazim was on his way to office from home located in Satellite Town when armed men opened indiscriminate firing on his car near his office at Sariab Road in Quetta. Resultantly, he sustained serious wounds and succumbed to his injuries before reaching the hospital.

Police and personnel of Frontier Corps rushed to the site soon after the incident and cordoned off the area. The deceased was moved to Civil Hospital Quetta for medico-legal formalities.Police quoting eyewitnesses said that the assailants were riding a motorbike who fled from the scene soon after committing the crime. “This murder appears to be a case of targeted killing,” a police official said,adding, that probe into the killing was underway to unearth motive behind the murder. The body of deceased was dispatched to Karachi for burial.

Following the incident, a large number of employees of GSP staged a protest demo infront of their office against the murder of Muhammad Mohsin Kazim and demanded for immediate arrest of the accused persons.“Government has miserly failed to provide security to the people while lawlessness has increased alarmingly in the province”, the protesters said.The protesting GSP’s employees declared a three-day mourning and strike in office.

In another incident, two people were killed on same Sariab Road of Quetta.Police said that Abdul Karim and Saleh Muhammad were sitting in a shop near Burma hotel when armed men appeared at the scene and opened indiscriminate firing on them. As a result, they received multiple wounds and died on the way to hospital. The killers escaped from the scene after committing the crime.However, police say motive behind the murder is yet to be ascertained. Police have registered separate cases of both the incidents and started further investigations. – Nation