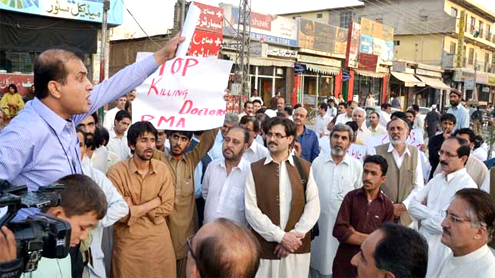 QUETTA: More than 70 doctors were arrested on Monday during a protest by PMA Balochistan against non-recovery of Dr Saeed Khan of LRBT.

Dr Saeed Khan was kidnapped on October 16 from Sariab Road of Quetta. Immediately after the abduction of the eye specialist, PMA Balochistan announced a boycott of all OPDs of state-run hospitals in Balochistan, which continues to date. However, the private clinics and hospitals were kept functioning. The Balochistan government had issued an ultimatum to doctors to return to work within 24 hours, but the PMA had rejected the warning.

Hundreds of doctors took out a rally on Monday morning from Civil Hospital Quetta under the leadership of PMA Balochistan President Sultan Tareen. The rally, marching through various roads of the provincial capital, reached Zarghoon Road. Standing yards away from the Governor’s and CM’s house, the members of the PMA, holding banners and placards inscribed with demands for security of doctors and criticism of government, shouted full-throated slogans against the government.

Meanwhile, the doctors tried to cross the security red zone to stage a sit-in outside the Governor’s House, which prompted the police to resort to shelling tear-gas. Subsequently, the doctors and police clashed which left a number of doctors injured. Police arrested more than 71 doctors. The PMA Balochistan spokesman Dr Aftab, while talking to Media , confirmed that they were on a hunger strike.

Following the tear gas shelling and arrests, PMA Balochistan announced a strike for an indefinite period and announced boycott of emergency services in all hospitals. Addressing an emergently-called news conference, the PMA members strongly condemned shelling and arrest of doctors who, they said, were holding a peaceful rally. They said several doctors were wounded and fell unconscious due to shelling, while more than 100 were arrested.

They expressed regret that instead of taking any action against the kidnappers, the government was acting against the doctors who were just recording their protest peacefully for the recovery of their colleague, Dr Saeed Khan. They accused the police of manhandling the doctors and termed the teargas shelling sheer injustice with doctors. On the other hand, the leader of Paramedical Staff Federation, Jamal Shah Kakar, expressed complete solidarity with doctors and also announced a complete boycott in the Civil Hospital.

In addition, more than 250 doctors have been issued show-cause notices by the government for continuing their protest despite orders to resume work. Balochistan Health Secretary Asmatullah Kakar told media that the doctors were given 24-hour ultimatum to ensure their attendance at work but they failed to comply with. – Dailymail