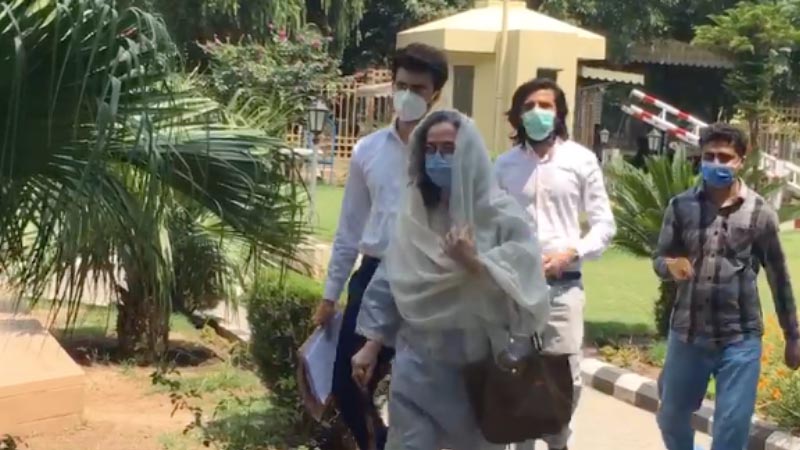 Spouse of Justice Qazi Faez Isa on Tuesday claimed that the Supreme Court was treating her case ‘differently’ and not in accordance with the standard it had set for Prime Minister Imran Khan’s assets case.

Sarina Isa was arguing before a 10-judge SC bench headed by Justice Umar Ata Bandial during the hearing of review petitions against the court’s order in presidential reference against Justice Isa.

On June 19 last year, seven judges of a 10-judge bench quashed a presidential reference against Justice Isa but also ordered the Federal Board of Revenue (FBR) to conduct an inquiry into the judge’s family members’ foreign assets and submit a report to the Supreme Judicial Council (SJC).

Mrs Isa argued that the Supreme Court did not set the same standards for her as it did for Prime Minister Khan in a petition filed by Hanif Abbasi seeking his disqualification for not disclosing his assets.

She also argued that the FBR did not share with her the “confidential report” submitted to the SJC despite the SC bench’s order a day earlier to do so.

According to her, the presidential reference had caused agony for a couple of years and she had been “killed a thousand times”. She asked the bench to not let her go through the pain again.

Mrs Isa argued that the FBR did not summon her husband, neither did the SJC summon her and in this context the FBR chairman illegally submitted the confidential report to the SJC.

Justice Munib Akhtar remarked that a “confidential report” could not be submitted to an individual based on an application alone.

Mrs Isa said that she had not asked for the report to be shared with her, it was the bench itself which asked that it be done so.

She asserted that the apex court’s decision to refer her case to the FBR was not correct despite the fact that she had provided tax details, transfer of funds and all other details to the court on June 18.

Justice Akhtar asked her to look at the statement she gave to the court on June 18, adding that she was given an opportunity to speak even then, and the bench could not accept the argument that she was not given a fair trial.

Justice Mansoor Ali Shah asked Mrs Isa to be brief and limited to the documents she had submitted to the court herself.

Justice Bandial observed that the FBR had ignored questions regarding the rent Ms Isa was getting from a property in the Clifton area of Karachi, as well as the income she got from a school.

The bench framed four questions for the judge’s wife, asking whether she had opened a fake bank account in another country; whether she had benefited from a trustee account in another country; if the transactions she had shown matched with the value of the properties she had purchased abroad; and whether all funds transferred by her had been sent through formal banking channels.

The bench asked Mrs Isa to provide details to the FBR pertaining to the period after August 5, 2009, when Justice Isa was appointed chief justice of the Balochistan High Court, adding that there is a question mark over two properties after 2009 since her spouse was not a public office holder.

Justice Isa told the court that he used to earn Rs3.1 million before he took public office. He wondered why in his case three ‘suo motu notices’ were taken — one by the Supreme Court, one by the SJC and another by the FBR.

He noted that such notices were usually taken on matters of public interest and wondered why the need was felt for them in his case.

The hearing was adjourned till Wednesday.