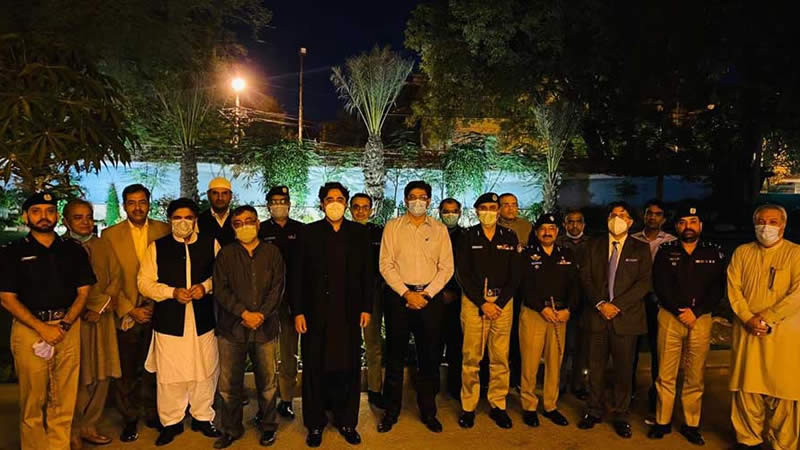 Hours after the Sindh police high-ups decided to go on leave in protest against the humiliation meted out to them regarding the arrest of PML-N leader Capt (retd) Safdar, Sindh Inspector General of Police Mushtaq Mahar deferred his own leave and ordered his officers to set aside their leave applications for 10 days, pending conclusion of the inquiry into the arrest.

In a statement issued on Tuesday, the Sindh police thanked army chief Gen Qamar Javed Bajwa for “realising the sense of hurt that prevailed within a uniformed force, and for promptly ordering an inquiry into the matter, which he has also assured will be impartial in order to restore the prestige of the Sindh police”.

Addressing a news conference on Tuesday, Pakistan Peoples Party Chairperson Bilawal Bhutto Zardari said that he wanted to know the identities of those people who had surrounded Sindh IGP Mahar’s house at 4am, shortly before the arrest of Safdar.

An FIR was registered against Safdar for chanting slogans of “vote ko izzat do” (respect the vote) and “Māder-e Millat Zindabad” (long live Mother of the Nation) at Quaid-e-Azam’s mausoleum and for allegedly threatening to kill someone.

The arrest came in response to a case filed by a relative of a local Pakistan Tehreek-e-Insaf (PTI) leader against Safdar. However, he was released on bail from court. Safdar had come to Karachi from Lahore on Sunday along with a PML-N delegation, including Vice President Maryam Nawaz and other party leaders, to attend the Pakistan Democratic Movement rally on Bilawal’s invitation.

According to the Sindh police statement, “This was a spontaneous and heartfelt reaction [going on leave] and made on an individual rather than a collective basis, because every single member of the department felt an acute sense of disrespect.”

Meanwhile, Sindh CM Murad on Tuesday said that the provincial government had decided to form an inquiry committee to probe the arrest of Safdar from a hotel in Karachi a day earlier.

During a news conference, CM Murad said that the PML-N leadership visited Mazaar-e-Quaid and “some things happened which should not have happened”.

However, he claimed that the PTI leadership desecrated the shrine many times as well.

“A false case can be filed but police did its due diligence,” CM Murad said. “I am not saying that the case was wrong, this is my own opinion, and that is for the court to decide. I cannot give a verdict here as it would compromise the inquiry.”

The chief minister said that three to five ministers would be part of the investigation committee and will present the findings to the federal government to ensure action can be taken and the people apprised of the facts of the situation.

Murad said the matter would also be raised in the Sindh Assembly.

“Their [PTI’s] intentions violated the sanctity of Quaid-i-Azam’s mausoleum,” he said. “That person who registered [namely Waqas] the FIR is a proclaimed offender. He comes from the National Highway, sits with the PTI members and then registers the case. Later, he says that he received death threats.”

Referring to the incident, Murad said the whole episode shows “PTI’s “incompetence and it “is necessary to change the government for the betterment of the people”.

US Election 2020: Trump and Biden Feud over Debate Topics