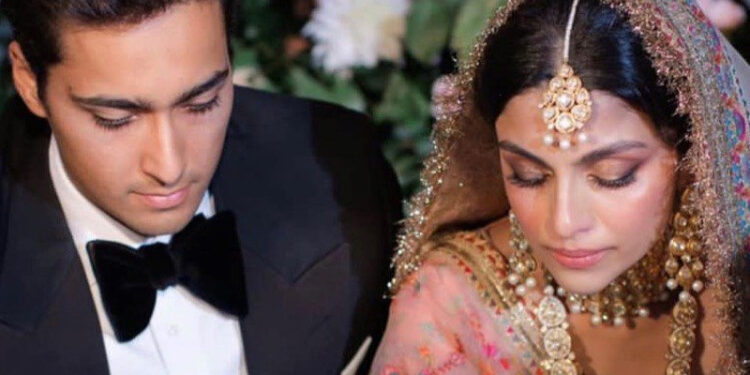 The highly-anticipated Nikkah ceremony of PML-N supremo Nawaz Sharif’s grandson, Junaid Safdar, was held with full pomp and splendour in London, on Sunday.

The son of Maryam Nawaz and Captain Muhammad Safdar Awan tied the knot with Ayesha Saif Khan at The Lanesborough, an elite five-star hotel on the Hyde Park Corner in Knightsbridge.

Ayesha is the daughter of the PML-N chief’s close aid Saifur Rahman Khan. Junaid donned a tuxedo from an undisclosed designer, looking dapper with slicked-back hair, while his ladylove stunned in a pink and gold Sabyasachi bridal lehenga. She chose to wear her hair in a neat bun and accessorised the outfit with traditional gold jewellery.

The wedding ceremony was attended by Nawaz Sharif and Ishaq Dar, both of whom sat right next to the groom on stage during the Nikkah. Ali Dar, son of Ishaq Dar, posted a picture with the groom on Twitter. He wrote, “Beyond the good looks there lies a heart of gold MashaAllah.

Here’s to an eternally blissful life ahead. Khush raho, aabaad raho hamesha [Stay happy and prosperous always].” The wedding was also attended by Shahbaz Sharif’s son Suleman and his wife.

Maryam Nawaz and Captain Safdar did not attend the wedding and were instead present at the function through video call. She tweeted out pictures of Junaid and Ayesha from the ceremony, writing “Allah hamesha khush aur aabaad rakhey [May God always keep you happy and prosperous].”

The PML-N vice president had previously said that she would not make any request to the government to seek permission to travel abroad to attend the wedding ceremony of her son. “Unfortunately, I will not be able to attend the ceremony owing to blatant victimisation, bogus cases and my name on ECL,” she wrote on the micro-blogging site while sharing an image of the invitation card.

My son Junaid’s nikah with Ayesha Saif-ur-Rahman Khan will take place in London on 22nd August Insha’Allah. Unfortunately, I will not be able to attend the ceremony owing to blatant victimisation, bogus cases and my name on ECL. 1/2 pic.twitter.com/7HYrm5mNaH

In another tweet, the PML-N leader recalled that she was in jail at the time of her mother Kulsoom Nawaz’s death due to cancer. “And now I won’t be able to share my son’s happiness, but, I will not make any request to this government for travel abroad,” she said. “I leave the matter to Almighty Allah.”

Maryam was put on the ECL after she was convicted in the Avenfield properties reference filed against her and Nawaz by the National Accountability Bureau. While the latter was granted permission to travel overseas on medical grounds in November 2019, Maryam was barred from travelling as her name remained on the no-fly list.

A protest was held outside the wedding venue by PTI supporters carrying placards that read “Luxury wedding with looted money.” A tweet about the protest read, “Big drama outside the hall where Junaid Safdar’s nikkah ceremony is happening.

PML-N workers on one side of the road and PTI workers on the other side. Hyde Park Corner (London) right now is a centre of attention.” However, the wedding festivities went ahead as planned.

A big drama out side the hall where Junaid Safdar nikkah ceremony is happening, PML-N workers on one side of the road and PTI workers on the other side. Hyde Park Corner (London) right now is a center of attention. pic.twitter.com/2W5q1rzxlV