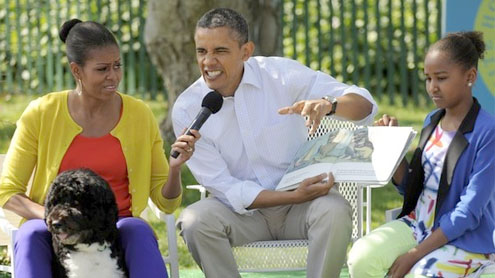 The entire Obama family — the President, the First Lady, Malia and Sasha, and Bo — turned out for the annual White House Easter Egg Roll on Monday.

The President is shown here giving his all to a reading of Maurice Sendak’s “Where the Wild Things Are” during the Storytime Stage portion of the event; Bo appears to be pretending not to know the First Owner (who looks hilarious).

The “Let’s Go, Let’s Play, Let’s Move” theme focused on health and exercise, and in the service of that, the President did push-ups and helped a young boy roll his egg towards the finish line. Celebrity chefs performed cooking demos — including Chef Marcus Samuelsson making healthful tacos — and attendees played a variety of games (some with basketballs that had the President’s face printed on them).No word on whether Bo snacked illegally on any of the eggs (or on any jellybeans), but he’s looking pretty mellow here. – Yahoonews