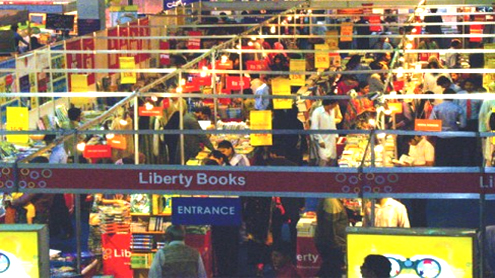 Besides dozens of public and private schools, thousands of students and book-lovers were seen buying and enjoying a wide variety of books on the fourth day of the fair. Many schools have already purchased vast stocks of books for their libraries. The event also witnessed the presence of Sindh chief minister’s Advisor Haider Abbas Rizvi, All-Karachi Private Schools’ Association chief Khalid Shah, dignitaries, politicians, academicians, scholarly personalities and celebrities.

It may be mentioned here that as many as 320 bookstalls have been set up in this year’s fair compared to last year’s 250 stalls. The organisers say that this year’s fair has broken all previous records, with many international publishers from the US, UAE, India, Iran, Singapore, Malaysia, Thailand, Turkey, Saudi Arabia, Germany, England bringing their rare and unique collections to the KIBF-2012. Almost all visitors to the fair Media talked to said that the book fair had brought the people out of monotony and the threat of terrorism. They were overwhelmed with gratitude for the enjoyment and pleasure the five-day fair had brought them.

They said the government should extend all-out support for more book fairs in the metropolis, asserting that it was the need of the hour. “This is a literary lesson for extremists and terrorists that their criminal and terrorists activities could never stop the country from progress and development,” they said.  Peak Private Schools’ Association President Haider Ali said the holding of the event in the city was really a gift for the citizens, who had been suffering from the rising crime of extortion, kidnapping for ransom, targeted killings, suicide bombings for long. KIBF Convener Owais Mirza Jamil told Media that more than 250 public and private schools had visited the fair which, according to him, was a new record.

He pointed out that the participation of so many schools in the event revealed the success of the book fair. “This year’s event has opened new vistas for the organizers that require the government to enhance the capacity of the fair,” he said. PPBA Chairman Aziz Khalid said that a large number of books designed for children had been sold out. during the first four days of the event. “Such large participation in the event by school students is really exemplary in the country,” he concluded. – Nation