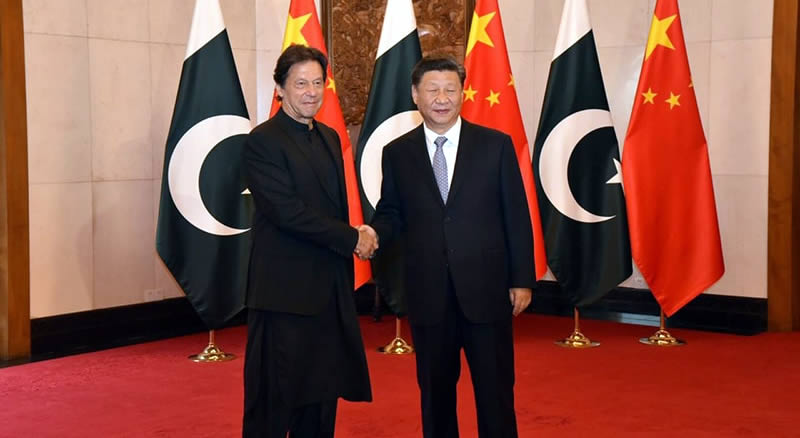 According to a PM Office press release, the premier thanked President Xi and the Chinese government for its “principled stance” on the Kashmir issue, particularly mentioning Chinese Foreign Minister Wang Yi’s stance on the issue at the United Nations General Assembly.

The premier said that China had supported Pakistan in all difficult times.

According to the press release, Prime Minister Imran briefed Xi about the current situation in the country, sharing that Pakistan had come out of a difficult economic situation.

“We will never forget China’s financial cooperation in this regard,” he was quoted as saying, adding that China had helped Pakistan without “any conditionality”.

Prime Minister Imran said that China provided Pakistan with the opportunity to come out of a very difficult economic situation and appreciated the Chinese support under the China Pakistan Economic Corridor (CPEC) framework.

“Pakistan and China are all-weather friends and strategic cooperative partners.”

The premier congratulated the Chinese president on the 70th anniversary of the founding of the People’s Republic of China and thanked him for the warm welcome the Pakistani delegation had received in Beijing.

President Xi lauded the premier for speaking about Pakistan and China’s relations during the UNGA, and said that both countries enjoy close friendly relations and cooperated with each other in different fields.
Xi’s visit to India

Meanwhile, Foreign Minister Shah Mahmood Qureshi, while referring to the Kashmir situation, on Tuesday said that the two countries have shared a joint strategy since India moved to revoke Article 370. He said that when Prime Minister Imran had spoken at the UNGA, the Chinese state council in his statement had also mentioned Kashmir and expressed his concern.

“It was his desire and ours to take each other into confidence [ahead of the visit],” the foreign minister shared, adding that once the visit concludes, the Chinese leadership will keep Pakistan fully informed.

“The nature of our relations is such that we take each other into confidence at every step,” Qureshi said.

Qureshi said they were grateful for the invitation to China, adding that Prime Minister Imran had extended a counter invitation to his Chinese counterpart, Li Keqiang, to visit Pakistan and would also extend an invitation to President Xi.

He shared that this was the premier’s third visit to China in 13 months and Pakistan wanted to reciprocate the hospitality they had received to the Chinese leadership.
PM meets Chinese premier

On Tuesday, the prime minister had met with Premier Li during which the two exchanged views on bilateral trade and economic partnership, and explored ways of increasing Pakistan’s exports to China.

According to a PM Office press release, both the leaders agreed that the implementation of the second phase of China-Pakistan Free Trade Agreement (FTA) would lead to more trade, economic and investment opportunities between the two countries. Other areas of potential collaboration discussed in the meeting included railways, steel, oil and gas, industry and science and technology.

Prime Minister Imran also held a series of meetings with the heads of major groups of companies in China dealing in oil and gas, mining, iron and steel, textile, power and energy sectors and invited them to invest in Pakistan.

Qureshi said that various memoranda of understanding (MoUs) had been signed, including in the education sector, for a desalination plant, one for disabled persons and one for narcotics control.

The prime minister had addressed the China Council for Promotion of International Trade after his arrival in Beijing, during which he expressed his desire to put 500 corrupt people in Pakistan behind bars, “just as President Xi had done“, to rid the country of corruption that he said was “one of the biggest impediments to investment“. – Dawn

This author has not added a biography. Meanwhile Top has contributed 2225 posts. Click here to view them.