Youth should in no way miss the IT revolution to generate revenue, fill the trade gap: PM 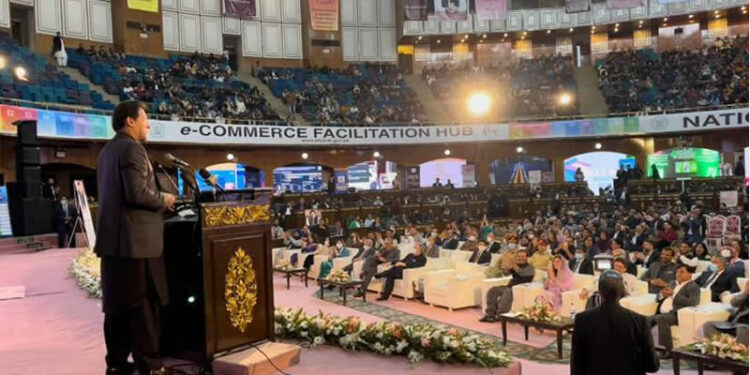 ISLAMABAD. Feb 21 (APP): Prime Minister Imran Khan Monday while assuring the government’s all-out facilitation, urged the youth not to miss the IT revolution which would not only generate revenue for themselves but also bridge the country’s trade gap.

“This is the technology revolution. The youth should in no way miss it. We expect the country’s IT exports to reach $50 billion in a few years,” the prime minister said addressing the launching ceremony of the National E-Tijarat Portal here.

He said the government would remove all impediments in the IT sector to facilitate youth so that they could benefit from the technology revolution.

He said the IT industry was youth-specific as tech giants became billionaires in their 20s and had old-aged people as their subordinates.

The prime minister said consequent to the government’s incentives, the IT exports had reached around $4 billion which would further enhance to fill the import-export gap.

Announcing zero-tax for registered e-freelancers, the prime minister said American technologist Bill Gates visited Pakistan last week at his invitation as he wanted to involve him in Pakistan’s IT sector.

He said he would come up with good news in a few days in that regard. However, he also lauded Bill Gates’s contribution to Pakistan for polio eradication as the country reported no case last year.

The prime minister, who earlier launched E-Tijarat Portal, said the country’s elite-centric system always resisted the common man from excelling. However, despite having no developed systems, Pakistan’s youth had immense potential.

He said the government had also introduced a core education curriculum for up to fifth class so far to do away with the systemic discriminations of English and Urdu medium education.

Exemplifying a freelancer girl Nadia from Gilgit, Imran Khan said IT provided the easiest opportunity particularly for women to contribute to the national development. Even the 60% of the country’s population under the age of 30 can also be used for this purpose, he added.

He said having an old connection with the overseas Pakistanis, he knew their potential as they excelled in numerous fields abroad wherever they got a level playing field.

The prime minister also appreciated his Special Assistant on E-Commerce Aon Abbas Buppi for his concise and informative presentation as well as his dedicated efforts to promote e-commerce.

He told the gathering that the incumbent government had inherited a bankrupt country but being a sportsman, he knew how to sail through the difficulties and always advised his cabinet never to worry about it.

Earlier, the prime minister also distributed awards among the youngsters running their startups in multiple fields.

In his address, Finance Minister Shaukat Tarin the prime minister always emphasized the digital economy knowing the fact that the world going towards the very course.

He said using the technology, people could now open their accounts, make transactions, buy houses and cars while sitting at one place.

He said Pakistan also wanted to move side by side the world which required the up-gradation of internet services. He told the gathering that while awarding 5G spectrum license, the government would prioritize quality services, not revenue.

He said through the first e-commerce policy, the government e-commerce as trade and also enhanced freelance payments from $5,000 to 25,000.

Buppi told the gathering that there were around 1 million active freelancers in the country and during last year, the country received $364 million investment through startups.

He hoped that Pakistan’s startups would emerge to compete with the e-commerce giants like Alibaba as more and more people registered on Amazon.

The SAPM said the country had around 110 million active internet users and the government was striving for enhancing the 3G and 4G connectivity to maximum areas which was an essential tool for e-commerce.

He told the gathering that the E-Tijarat Portal would impart freelancing education to youth, promote local products through localized portals. A National E-Commerce Council will also be established to accredit the freelancers for their worldwide recognition.