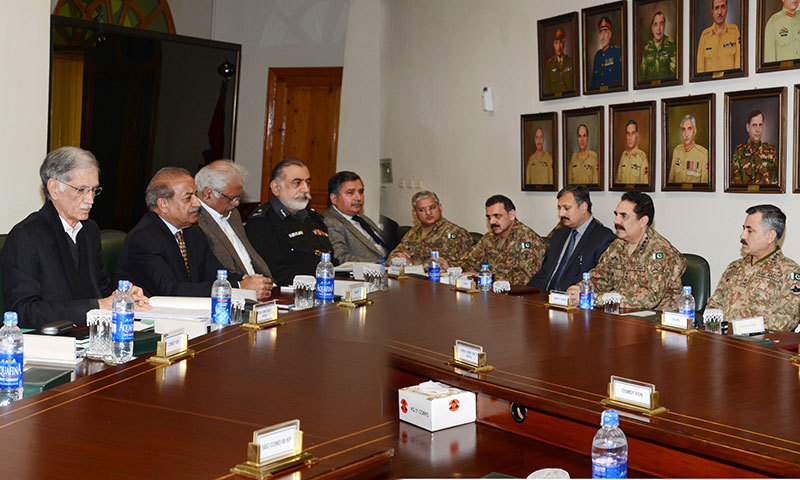 According to an Inter-Services Public Relations (ISPR) statement, Chief of Army Staff (COAS) General Raheel Sharif assured the forum that Pakistan Army will join hands with political government and Fata administration to expedite the return of IDPs as per already prepared plan in phases, beginning next month, and ensure a comprehensive resettlement.

Governor KP, Chief Minister, senior provincial government and Fata secretariat officials and Peshawar Corps Commander attended the meeting. Apex Committee is a newly formed mechanism to coordinate security and to implement the recently approved National Action Plan at the provincial level. The forum discussed the prevalent internal security situation in Fata and the province against the backdrop of National Action Plan and also reviewed the progress of ongoing operations Zarb-i-Azb and Khyber and return plan of IDPs. Army Chief Gen Raheel paid rich tributes to the resilience and sacrifices of the people of Fata and KP province.

“With unflinching resolve and courage, our proud tribesmen of Fata and people of KP stood up to atrocities of the terrorists, pushed them back and marginalised them in the society,” he said. The COAS said that after the Peshawar carnage, “the entire nation stands united to fully uproot the menace of terrorism and extremism”. He assured the forum of Army’s full support for judicious and speedy implementation of National Action Plan to eliminate not only the terrorists but also their abettors, facilitators and sympathisers from the entire province and Fata.

#Apex Cmte Mtg Psr: To build capacity of Frontier Constabulary,Army Chief announced to give four thousand AK-47 rifles to them from Army ASP

The army chief also announced to give four thousand AK-47 rifles to Frontier Constabulary (FC) paramilitary force to build its capacity in the fight against terrorism.

The governor and chief minister KP appreciated the whole hearted support of Pakistan Army and reiterated the resolve of Fata and the provincial government to rid the province of terrorism and extremism and pave the way for development and well being of the people. Emphasising the importance of joint execution of a comprehensive security plan, both governor and CM vowed to work tirelessly to bring peace and stability back in the region. -dawn

Afghan President Says US Might Want to ‘Re-examine’ Pullout Deadline