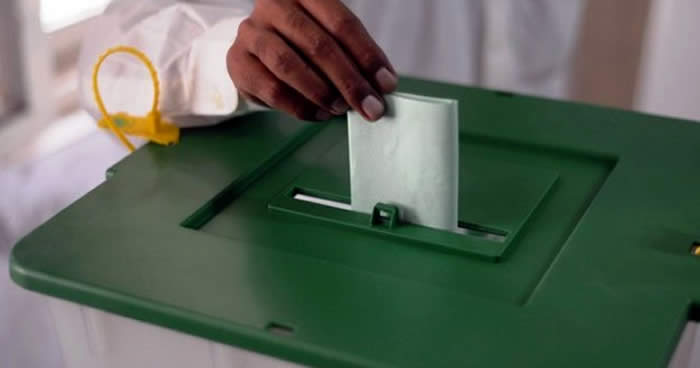 Men queue up outside the Saheli Sarkar polling station in Muzaffarabad on Sunday. A woman casts her vote in Karachi. Voters show their identity cards in Lahore. An old man flashes his thumb after casting his vote in Jhelum valley. Soldiers patrol a street to deal with any untoward incident.—Tariq Naqash-Dawn / Shakeel Adil-White Star / PPI / Online

MUZAFFARABAD: The Pakistan Tehreek-i-Insaf (PTI) was all set to form the next government in Azad Jammu and Kashmir (AJK) on its own, as unofficial and unconfirmed results for 43 of the total 45 general seats of the Legislative Assembly suggested it being far ahead of its competitors.

Addressing his supporters in Mirpur, Mr Mahmood expressed his gratitude to the Kashmiris for reposing trust in his party which he said was all set to comfortably form its government in the liberated territory. He attributed the PTI’s success to the “vision of Prime Minister Imran Khan” and the “worst-ever performance of the outgoing PML-N government” in AJK.

In Muzaffarabad district, PPP’s regional president Chaudhry Latif Akbar secured a comfortable victory from LA-30 (Muzaffarabad-IV) constituency. Since 1985, Mr Akbar has won six of the nine general elections from this constituency besides one by-election.

Also, PTI’s central joint secretary Khawaja Farooq Ahmed emerged victorious in a tight competition in the Muzaffarabad city with the PML-N candidate and an independent candidate. As a large digital screen outside his family home across Muzaffarabad’s Combined Military Hospital announced his victory, his supporters set off firecrackers as a mark of celebration.

Raja Farooq Haider, who contested from two constituencies of his Jhelum valley district, lost to PTI’s Deevan Ali Chughtai by a big margin in one of them. However, in the other constituency, he succeeded, though by less than 800 votes, according to his press secretary Raja Wasim Khan.

Sardar Tanveer Ilyas Khan and Malik Zafar Iqbal of the PTI won from Bagh and Raja Mahal from Kotli, respectively. Mr Iqbal defeated the formidable Malik Nawaz of Muslim Conference who had never lost any general elections since 1985.

In Kotli, Chaudhry Yasin of the PPP returned from both constituencies. Apart from him, Javed Iqbal Bhudanvi of his party also clinched victory, defeating younger brother of veteran politician Sardar Sikandar Hayat. Ansar Abdali and Chaudhry Akhlaque of the PTI also won in Kotli.

In Poonch, PPP’s Sardar Yaqoob Khan, former president and prime minister of AJK, won from his home constituency on the outskirts of Rawalakot. In the same district, Shahida Saghir and Abdul Qayyum Niazi of PTI also won. In Sudhnoti district, Faheem Rabbani and Sardar Muhammad Hussain of PTI secured victory.

In the upper belt of Neelum valley, PML-N’s Shah Ghulam Qadir was among the successful candidates, while PML-N’s Waqar Ahmed Noor and PTI’s Ali Shan Soni retained their seats in Barnala and Samahni, respectively.

From among the indigenous parties, former prime minister Sardar Attique Ahmed Khan of AJK’s Muslim Conference secured victory by a wide margin from Dhirkot, retaining the seat that has always returned his family.

In the 12 constituencies in Pakistan, PPP’s Aamir Ghaffar clinched victory in Karachi by a wide margin to secure his third electoral victory, two of them in succession.