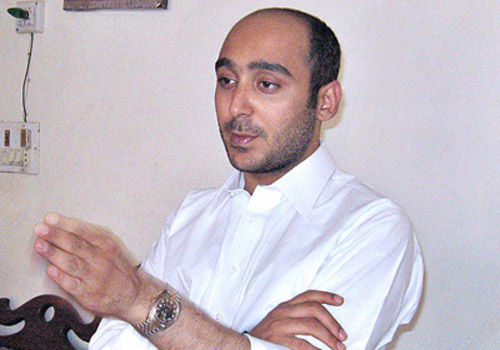 Ali Haider Gilani handed over to Pakistan officials in Kabul

Son of ex-prime minister Yousuf Raza Gilani, Ali Haider Gilani, who was recovered in an operation in Afghanistan three years after being kidnapped, was handed over to Pakistan officials in Kabul on Wednesday.

A special aircraft left Islamabad for Kabul to fly back home Ali Haider, who was recovered in a joint operation of Afghan and US forces from an Al Qaeda compound in Afghanistan’s Paktika province. Senior protocol officials of Foreign Office and brother of Ali Haider Gilani are in Kabul to bring Ali Haider home, said Foreign Office spokesperson Nafees Zakaria. He said Ali Haider would be handed over to Pakistan Ambassador to Afghanistan Syed Ibrar Hussain at the ministry of defence in Kabul, from where he would be taken to Kabul airport to travel to Pakistan. Kasim Gilani, the twin brother of Ali Haider, posted a picture on Twitter before departing for Kabul to bring his brother home.

The information about the recovery of Haider, who was kidnapped after an election rally in May 2013 in his hometown Multan, was conveyed by Afghan National Security Adviser Mohammad Hanif Atmar to Adviser on Foreign Affairs Sartaj Aziz in a telephonic conversation. I called Mr Yusuf Raza Gilani and informed him about the good news. He was ecstatically delighted as expected and grateful of President [Ashraf] Ghani’s personal attention to his son’s safe release,” the Afghan ambassador said in a statement. “He also thanked the Afghan Security Forces for bringing a happy ending to a dreadful family saga for them.”

A Pakistani security source said that Afghan and US forces raided the Al Qaeda compound after being tipped about the presence of a high-value target. But an official US statement that the State Department shared with Dawn in Washington stated that the rescue mission, which was part of a joint US and Afghan counterterrorism campaign called “Operation Freedom’s Sentinel”, was launched after intelligence sources confirmed “evidence of terrorist” activity in that area.

Four enemy combatants were killed as a result of the operation. No other injuries or damage was observed or reported,” the statement added. A spokesman for US forces in Afghanistan, Brigadier Charles Cleveland, told the Associated Press that Haider had been held in a compound occupied in Gaylan district by Al Qaeda operatives. “He [Haider] was the sole non-combatant, he didn’t fight back, so we picked him up,” he said. He said that Haider had been flown by helicopter to the Bagram Air Field, 45 kilometres from Kabul. Haider was running for a provincial assembly seat from Multan when he was kidnapped on May 9, 2013. One of his guards and his secretary were killed during his abduction. He remained in captivity for three years.

Taking off from Islamabad to bring back our hero @haidergilani pic.twitter.com/ni3se866CF