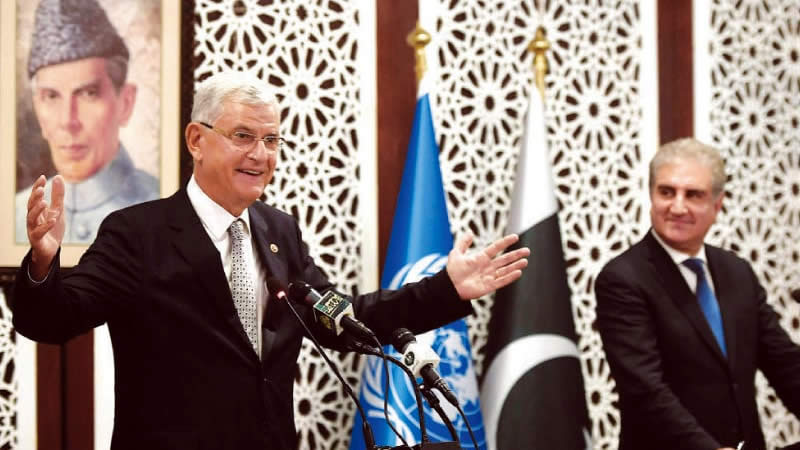 President-elect of the 75th session of the United Nations General Assembly Volkan Bozkir on Monday stressed the importance of a peaceful resolution of the Jammu and Kashmir dispute for regional peace and security and offered to mediate between arch-rivals India and Pakistan.

“Resolving dispute over Jammu and Kashmir is the key to a sustainable peace in South Asia. Regional security should be maintained through regional and diplomatic solutions,” Mr Bozkir said after his meetings with Prime Minister Imran and Foreign Minister Shah Mehmood Qureshi.

Mr Bozkir, the first Turkish citizen to be elected as UNGA president, was speaking at the Foreign Office alongside Foreign Minister Qureshi. His two-day visit to Pakistan is his third overseas trip since his election as the president of the General Assembly (PGA) in June. He has previously toured Qatar and Russia. He is scheduled to travel to New York on Aug 17 to prepare for assuming the charge next month.

“Difficult challenges can be resolved peacefully and satisfactorily through meaningful mutual engagement. If any assistance as PGA is requested by the parties, I would be ready to provide a contribution within my mandate,” he said.

Mr Bozkir said one of the purposes of visiting Pakis­tan was to understand the country’s position on Kashmir instead of solely relying on official notes. He underscored that he was restrained in his remarks by the impartiality rule he had to observe as PGA. However, he noted that he won’t forget that he is a “Turkish citizen and brother of Pakistan in that respect”.

Foreign Minister Qureshi, speaking on this occasion, said he “minced no words” in conveying the gravity of the situation in occupied Kashmir to the PGA-elect. “I can assure you that the sentiments of the people of Pakistan were conveyed honestly,” he added.

Mr Qureshi said it was his desire to have a debate in the UNGA on Kashmir, adding that the General Assembly represented the “pulse of the world” and the “view of the comity of the nations”. He said he would do “whatever possible to collect other countries to present to PGA the need for a discussion on Jammu and Kashmir in UNGA”.

The Prime Minister Office, meanwhile, said in a statement that PM Khan in his meeting with Mr Bozkir spoke about “the dire human rights and humanitarian situation in IOJK” since India illegally annexed the region on Aug 5 last year. He specifically mentioned the ongoing gross and systematic violations of human rights of the Kashmiri people and the attempts to change the demographic structure of the occupied territory.

“He stressed that the UN must play its rightful role in addressing the grave situation and ensuring that Kashmiris exercise their right to self-determination promised to them in the relevant UN Security Council resolutions,” the PM Office said.

Mr Bozkir, in his press conference, said the priorities proposed by the Pakistan government for the agenda of the next session and his thinking were very much aligned.

“We are looking in the same direction,” he said and observed that the UN role should be more towards providing for “the countries in need” rather than the powerful ones that could do without the global body. These issues, he added, would be a “very important priority” during his one-year tenure in office. Working on them, he believed, would increase UN’s credibility as well.

Talking about his agenda in office, Mr Bozkir said he was taking over at the “historic occasion” of 75th anniversary of the founding of the United Nations. Therefore, he added, it was a time to reaffirm commitment to multilateralism.

“First thing to do is to give a chance to multilateralism at UNGA and give a chance to the countries to present their voice, their problems and their difficulties so that everybody can listen and understand. It would be then much easier to address them,” he maintained.

Mr Bozkir also called for resumption of activities at the UNGA after a five-month break due to the Covid-19 pandemic which, he said, served “a blow to the credibility of UN”.

He said: “When people needed UN, it stayed at home with virtual meetings and decisions without voting. We must bring UN back to life.” He cautioned that the UN could not continue to work like that because it might then lose its relevance and effectiveness. “We don’t have the luxury for this kind of a situation,” he added.

He expressed the hope that the UNGA would meet physically next month with no restrictions for the participating leaders and representatives unless the Covid-19 situation changed in a big way in September.