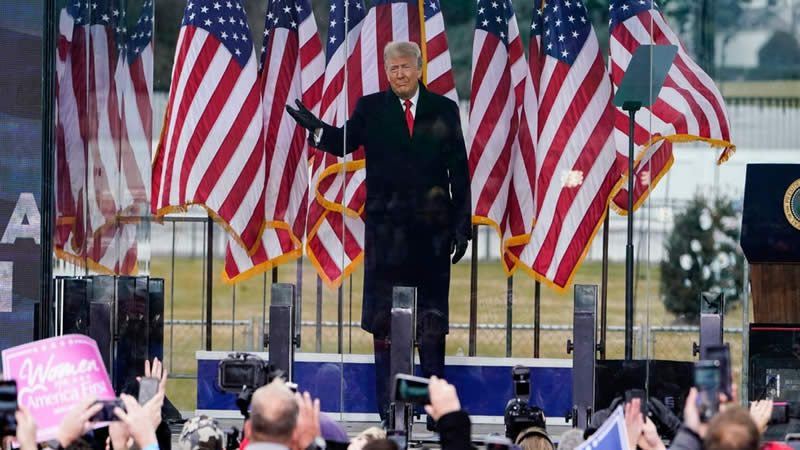 A race by Democrats to remove President Donald Trump from office is gathering momentum as some of his fellow Republicans begin to break ranks.

The House of Representatives’ third most senior Republican, Liz Cheney, said she would vote to impeach Mr Trump over last week’s US Capitol riot.

Earlier in the day the president took no responsibility for the breach of Congress by supporters of his.

He will be succeeded by Joe Biden, a Democrat, on 20 January.

The House plans to vote on Wednesday to charge Mr Trump with inciting insurrection, which would make him the first US president ever to be impeached twice.

What have Republicans said?

Ms Cheney, the daughter of former Vice-President Dick Cheney, vowed to back impeachment, the first time a leader of the president’s own party has done so since Richard Nixon’s time in office. She said in a statement: “There has never been a greater betrayal by a President of the United States of his office and his oath to the Constitution.”

The Wyoming representative added that Mr Trump had “summoned this mob, assembled the mob, lit the flame of this attack”.

House Republican leader Kevin McCarthy, a Trump ally who has said he opposes impeachment, has reportedly decided not to ask rank-and-file members of the party to vote against the measure.

According to the New York Times, Senate Republican leader Mitch McConnell has told confidants he is pleased Democrats want to impeach the president because he believes it will help rid the Republican party of Mr Trump.

The measure accuses Mr Trump of “trying to unlawfully overturn” the results of November’s presidential election and of having “imperiled a coequal branch of Government”.